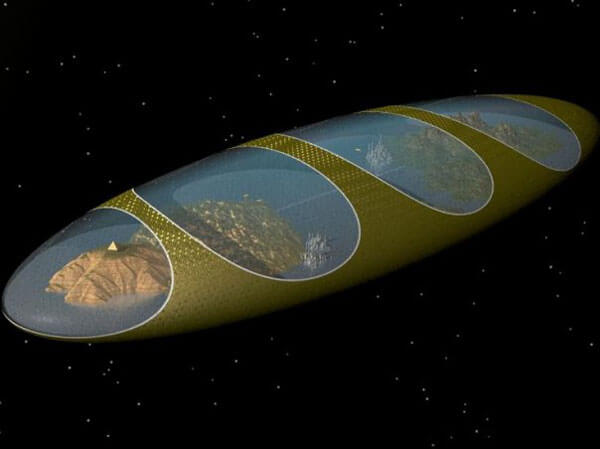 The Galactic Federation has an enormous fleet of space ships at its disposal that mediate, or if needed, intervene in any place where conflicts impend. The interdimensional technologies that they can use are of such a high level that we can hardly imagine them. Their control of energy is almost perfect, so things like de-materializing, becoming invisible or the creation of small orbs of energy that can be released with an assignment (for example to create crop circles) is no problem at all.

Their ships are often created of living material. Some are as large as planets and are totally self-sufficient with woods, fields and rivers. The Federation’s fleet consists of ships of the participating nations and several singly operating fleets. Some of these fleets are headed by commanders who have become somewhat renown on Earth and are sometimes channeled, like Ashtar and Hatonn. These channeling started some 50 years ago and lately more and more self-declared mediums claim to be doing so, but most of them don’t seem to be very pure.

The Galactic Federation is controlled by a large council, made up of smaller councils, that themselves consist of even smaller councils, each of which has representation from all of the separate members. This way this enormous organization stays manageable. The hierarchy between members is usually determined by their spiritual development. The most highly evolved members are beautiful light beings who voice the Will of God.

At this moment a considerable part of the Galactic Federation is present around the Earth to bring the tumultuous end of our cycle of duality to a happy conclusion. Although our whole universe ascends the Ascension of the Earth is a different story. The millions of ships that are currently hovering around the Earth are roughly split into three layers, of which the outer layer contains the biggest ships (2). This is no static unity but a continuous arrival and departure of all kinds of ships that use the hyperspace and stargates like the sun (3) to travel to their home planets or other places in the universe.
Since the population on Earth is human, the human civilizations within the Galactic Federation play an important role in the assistance with our ascension process. To this group belong, for example, the Pleiadians and the Sirians. About 40% of the Galactic Federation is human, the rest consists of other species and light beings. Many of them share a genetic link with us but are more highly developed than we are.

They have visited our planet for millions of years and left behind many souvenirs such as buildings and art objects, although many of them have been made by negative alien visitors who are no part of the Galactic Federation.
This link with extraterrestrials is hidden as much as possible by mainstream science, which is under the control of the Illuminati. To obey the Universal Law of Non-Interference as much as possible, the contact with earthlings has been kept to a minimum by the Galactic Federation until now. People that they contact directly, like Billy Meier of Switzerland, Carlos Diaz of Mexico and Howard Menger of the US (6), often have a genetic link with a certain galactic civilization. They live a life on Earth on behalf of them so that their experiences can be shared later. As this usually happens in a higher dimension, the others can literally tap into the energy of a certain experience and relive it (7).

Only by exception do friendships between friendly aliens and earthlings arise when this was not originally planned to happen .Generally they stay in the background as much as possible. However, they are the guarantee that the Ascension process goes as planned and that the actions of the illuminati, who are trying everything to disturb this process, are not too effective. They’re keeping the oxygen level in our air up to the mark, preventing nuclear attacks and wars , cleaning up radioactive fallout, eliminating (chemical) pollution, chem-trails and diseases and minimizing the effects from natural disasters, man-made or not, etc.

As soon as the heads of Government of the countries on Earth, who mostly know of their existence, exercise transparency, this will change. According to the channeling (10) which are the way that the members of the Galactic Federation communicate with us until now, they will then show themselves in public more and their superior technology will partially become available for us.