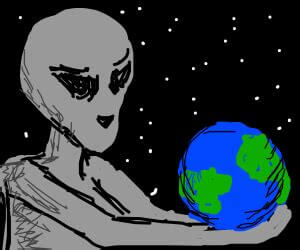 Us humans like to think that we are enlightened. We like to think that we are knowledgeable. Unfortunately, in the big scheme of the Universe, we are only a tiny, tiny little cog in the wheel. If even that. We are always learning new ideas that prove past ones wrong. That fact alone should humble us more than it does. This article is going to question one of those long held beliefs; that the Earth belongs to us. In fact, we very well could be the aliens.

The point of this article is not to talk about the evolution of humans. It’s just necessary to realize that almost all humans, in one way or another, believe that humans are not natural to Planet Earth.

Humans Must Be Aliens

By simple deduction; if humans aren’t from planet Earth then we must be aliens ourselves. Like I already stated, this idea is not new so that’s not what I want to talk about. What hardly ever seems to be pointed out though is if the Earth isn’t our planet then who’s planet is it?

We like to call aliens visitors as if the Earth is ours and they are just passing through. The aliens might see things in the exact opposite way. If they caused human existence on planet Earth then that means that they would have had to known about the planet’s existence before we did. That would mean that the alien (visitors) probably believe that the Earth belongs to them and that we are the ones that are just passing through!

Our existence on Earth could be nothing more than one big alien science experiment. We could speculate for hours about what this experiment might be. We aren’t going to do that now because the answer to that question has nothing to do with this topic.

If we were put here as one big alien science experiment and the aliens really believe that the Earth belongs to them then a lot of questions would be answered.

If the aliens are doing experiments on people then it would explain all of the alien abductions. Us UFOlogists like to think that aliens are benevolent and that they are here to help us but that may just be wishful thinking. Humans may be nothing more than lab rats to the aliens.

Many UFOlogists have noticed that UFO sightings often occur at Nuclear Power Plants and Weapons facilities. Assuming aliens really see the Earth as their property would explain their interest in our Nuclear Capabilities. Some people have speculated that aliens keep track of our technology in order to make sure that we can’t destroy them. I don’t believe aliens are scared of us at all. I think their interest in our Nuclear Technology is purely to make sure that we don’t destroy their Earth-Sized Petri dish. We don’t know how long they plan on needing us here for their experiments not do we know what their plans for Earth are after they are done with us.

What does it mean if the Earth really belongs to the aliens and not us? To us, not much. Like most of our articles this one is purely for the joy of thought and speculation. The one thing that is for sure is that almost everything is out of our control, but if we choose to look at life from all possible angles we may some day find the truth. Living in truth is a reward in itself. The next time that you look up at the sky and wonder if there are visitors, think about the fact that you might be the visitor.