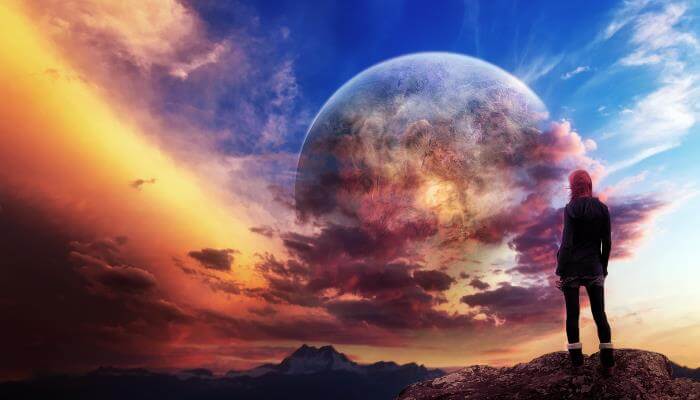 On June 8, 2020, the journal Nature Astronomy published the results of a study of data collected by the Cassini mission, an interplanetary automatic station launched in the mid-1990s to Saturn.

According to the data compiled by the satellite and to the great surprise of scientists, Titan, the largest of Saturn’s satellites, is moving away from it at a speed of 4 inches (11 centimeters) per year. This is 100 faster than astronomers thought before.

The news, of course, is now widely discussed in the scientific and parascientific world, since there is no explanation for what is happening with the “academics”. The planet and its satellites are an ideal mechanical system where there is no friction and therefore, according to theory, the movement should continue indefinitely – at the same speed, in the same orbit.

A similar mechanical paradox occurs with the Moon, which is getting away 4 centimeters a year from the Earth and that was, as it were, known for a very long time. When trying to interpret this miracle somehow, astronomers invented the theory of “tidal acceleration”, according to which the Earth’s rotation accelerates the Moon. This miracle theory, like many modern theories, is rather idiotic in its own way.

The most important idiocy is that the Moon is definitely not responsible for the ebbs / flows of the Earth – they occur for some other reason. A lot of research has been devoted to this topic, which we will not dwell on now. Further, assuming that “tidal acceleration” exists, it should work globally. In particular, with stars, which, according to theory, are either liquid or gas. This is especially true of paired stellar systems, where the distance between the stars is comparable to their size, and the speeds of matter are comparable to the speed of light.

For example, pulsars make 700 revolutions per second, spinning like turbines and moving in orbits at speeds of hundreds of kilometers per second. In theory, “tidal acceleration” should scatter them to different ends of the galaxy, but this does not happen and the stars fall on each other, since “tidal acceleration” can only slow down, and not accelerate.

With planets, everything happens the same way, therefore, clinging to the liquid mantle by gravity and causing its displacement, the Moon should slow down and lose its orbit. In addition, there is a certain amount of solar wind matter in the solar system. The substance is not dense, however, it slows down the ISS and the station needs to be constantly dispersed. Naturally, the substance is denser in the orbit of the ISS than around the moon, and the ISS is not slowed down for millions of years.

Based on the foregoing, it should be obvious that the theory of “tidal acceleration” does not work and that Titan’s migration from Saturn should have some other reason? There may be many reasons there, but if you put aside the exotic ones (deformation of space-time, the plant at the crystal spheres has ended, and so on), then the only reason for the departure of Titan is the appearance of a huge mass near Saturn, which pulled Titan onto itself. For example – a black hole or a neutron star.

If this is true, then it can be assumed that when this hypothetical black hole / neutron star approaches us, then, first of all, it will deal with the theft of the moon, accelerating its distance once a hundred. How does this threaten us? In theoretical mechanics, there is such a problem, which is called the intermediate axis theorem, which is popularly known as the Dzhanibekov effect:

The essence of the theorem is that when a body rotates with three different main moments of inertia, rotation around the second main axis of inertia is unstable. The Earth is not a perfectly balanced ball, so in theory it should behave like a nut in the video above, changing the axis of rotation, if not several times a minute, then once every several years. But this does not happen. Why?

This does not happen because the Earth has a moon, which balances the system. And this is a scientific fact, to which 333 scientific articles are devoted. Therefore, if Nibiru or something else slightly pulls the Moon out of its orbit, the Earth awaits a somersault, so watch out for events. By the way, back in 1976, green men from a flying saucer made a sortie to Spain. And something tells us that in heavenly mechanics they understand a little more than enlightened astronomers.