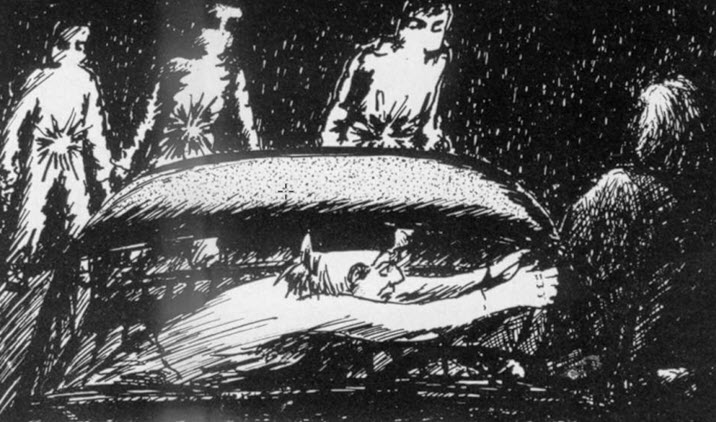 On the evening of October 19th 1973 in Draguignan (France), Gabriel Demogue and his girlfriend were traveling on his motorbike up a road leading to the top of a local mountain/hill known as “le Malmont”. Suddenly, the girl notices on her left a vivid orange ball traveling in the sky and keeping up with them. The ball is surrounded by a lighter halo that seems to revolve around it. The couple stop to observe better. The object seems to be at an altitude of 500 to 600 meters. They observe it for a while and as it disappears behind a mountain crest it leaves a red glow. The girl is afraid and asks Gabriel to take her back home. Shortly after dropping her home he talks to a friend about the incident. The friend is a member of a local UFO interest group and decides to get hold of his colleagues and go and investigate the area on the same evening.

After a while a group of four (Gabriel did not join his friend and colleagues), set-off with two cars (an R8 driven by Alain Leca and an undisclosed companion and a Fiat 128 with Georges Macret and Chrisian Bensa) to a panorama view point on at Malmont. Once there, they park their cars facing downhill (to ensure a quick escape in case something happens) and and walk towards the panorama table and the two benches. It is totally dark but few moments later they notice a glow over the Malmont mountain at a distance of about 80 meters. Then they hear a strange noise coming from the direction of the glow; the closest but still inexact description of that sound was that of radio interference. Immediately after the group senses and increase in temperature. A red light appears below the white glow. The red light starts to descend the rocky path from the summit leading to where the group was standing (the panorama table). They can even hear the sound of pebbles as if someone heavy was displacing them while walking. The four friends become preoccupied and are now afraid, three of them hide behind a short wall downhill from the panorama table while the fourth one (Alain Leca) hides by laying full-length on one of the benches.

From their hiding spot, they keep looking at the descending light and can see that the light is attached to a dark silhouette. The silhouette is from 2 to 3 meters tall. Once at a distance of 25 meters from the group and less than 20 meters from one of the cars (the R8 belonging to Alain Leca) the silhouette stops examines the ground and picks something up. The silhouette stands straight again. The red light that they can now clearly see that it is at waist level is turned off and the sound they could hear from the start of the phenomena stops. It is now all dark and silent. A few moments later they hear the sound of breaking branches and that of the R8 violently shaking several times. The group is in panic and decide to flee the location. The plan is that they will make a run to the cars and if the engines refuse to start they will hide behind some bushes down in the adjacent gorge.

Alain´s companion runs towards the R8. The moment he is about to open the door a powerful beam of light coming from the hilltop is shone over them. They lie on the ground to avoid being detected. Once it is all dark again they get to the cars and try to start the cars. George and Bensa with their Fiat have no problem in starting the car; the R8 is helped by the downhill slope and after few moments, it is also on its way out of there. Alain however is curious and after a few meters of driving stops and looks back (at the same time his companion is in panic mode and wants to just flee). He detects at about 5 to 6 meters away, an identical silhouette to the one observed earlier. Then he notices two more; all three are over 2 meters tall. Alain starts the engine again and drives some 10 to 15 meters further on. He looks back again and sees that the three beings are just standing. He reverses the cars to get a closer look and stops at a distance of 5 meters from the nearest being. Alain opens the car’s door; turns back towards them and shouts “Are you good or are you bad?”.

The being closer to him turns towards the other two beings and they all start to talk in a strange language consisting of what can only be described as modulated whistles. Next the beings start to move at a faster pace towards Alain´s car. Alain drives off and stops at about 50 meters further on; nobody is following them. He decides to go back to the panorama table and make contact with the beings. He makes a u-turn and with his headlights full-on he heads towards them. Once at the panorama table he sees nothing but the white glow over the hilltop. He scans the area without leaving the car. He fears that the beings may be hiding and waiting for them to get out of the car. To the relief of his companion they leave the location and drive down to Draguignan. From this encounter Alain is able to capture some details. The beings stood at over 2 meters, walked in a slow mechanical manner and wore a red one piece suit that seemed to be lit from a light source under the clothing. Their heads or helmet is square and has one or two luminous opening at the level of the eyes. One of the humanoids did not wear a helmet but something like a mask or a veil covering the whole face; Alain was not sure what he saw.

At the same time, Georges and Christian who escaped the scene first on their Fiat 127 also had a bit of an adventure. When they had driven about 100 meters away from the scene, for a fraction of a second they see a few meters ahead of them a pair of red legs crossing the narrow road in two strides. They hit the brakes and at the same time the headlights and dashboard lights go out. Taken by surprise they narrowly avoid a crash. Then, few seconds later they lights come back again. They manage to keep the car on the road and the two friends continue to drive. Christian (the co-driver) was so afraid that had hidden below the dashboard as if he did not want to see anymore weird happenings.

At about 150 meters further down the road the pair stop at a parking area to wait for their friends. They waited for a few minutes but there was no sign of Alain and his companion. In a state of panic Georges started the car again and continued the journey back to Draguignan. One kilometer further along the way Georges saw the “red legs” again (Christian did not see them as he was hiding under the co-driver´s storage compartment. This time he saw them descending a steep slope towards the road he was on. He continued to drive and did not make any efforts to take a better look. Where these disembodied legs (there are actually witnesses in Spain who have seen disembodied legs cross roads in the recent past) or just what Georges perceived of the beings during his rush to get out of there? Did these beings have the ability to appear and disappear at will?

Further down the road and about half-way between Malmont and Draguingnan Alian and Georges have a final experience. The car starts to move by an unknown force. While traveling at an approximate speed of 70 km/h on a straight road, for a moment and without any participation by the driver, the car is thrown sideways at a right angle to the road and then completely by itself returns to its original position.

Once at the outskirts of Draguignan, Georges and Christian stop again to wait for their friends. After about 15 to 20 minutes Alain and the undisclosed companion arrive. Their adventure was finally over. Could the meaning of the hill Malmont and of their town Draguignan have anything to do with all this or signify that the location is somehow “special”? In French “mal” means bad or evil, therefore, Malmont means evil mountain. On the other hand, Draguignan comes from the Roman Dracoenum which means town or place of the dragons (reptilians?). Could it be that the above incident is just one of many that have taken place in this area? We will keep investigating.