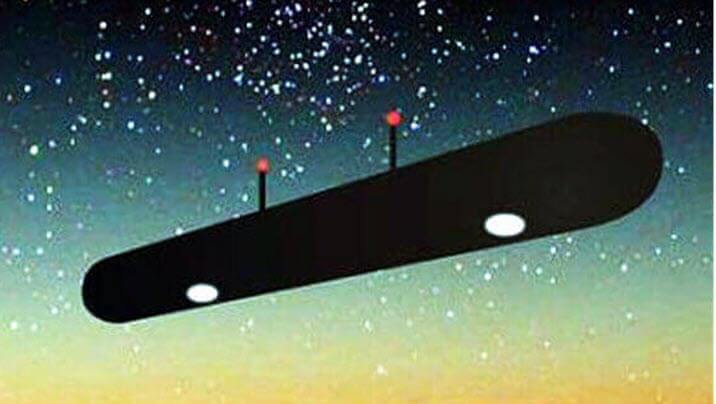 The UFO phenomena is not recent. There are many cases from the early 20th century much earlier than the Roswell incident that signaled the start of the UFO era. In fact, in 1909 south England and Wales witnessed a UFO wave. The most interesting case of that time took place in Caerphilly, Wales just at the North of Cardiff. The witness was C. Lethbridge and the time and date was 11 pm, May 18th.

That evening he was walking back on a road that crossed the Caerphilly hill. When at the summit of the hill, he noticed a large cigar-shaped object (12 to 15 meters) on a field by the road. Next to the object he noticed two men; apparently, there wan nothing non-human about them. They seemed to be working on something just a few meters away from their craft. The two men wore thick and tight-fitting clothing. Lethbridge described them as wearing tight-fitting fur coats and fur caps. The time of the year was May, so it should have not been so cold. Maybe he mistook their clothing because he did have no other reference for thick clothing.

Although frightened he decides to approach them. The two men notice him and become nervous. He is now only 20 meters away from them. They start to discuss in an unknown language (unknown to Lethbridge), they pick something up from the ground and rush towards the craft. At this moment the craft began to hover a few meters above the ground. The two men hop on a platform suspended from the craft. Now the object and the suspended platform begin to rise in the sky in zig-zag fashion and two lights begin to shine. Once at a certain height, the craft starts to travel towards Cardiff.

There are reports that the cigar-shaped craft was seen by others that night. Witnesses include a railway signalman at Cardiff’s Queen Alexandra Dock who saw the object at around 1:15 am.

It is said that the next day Lethbridge and a local reporter visited the site of the landing. They found several strange items, such as a plug on a chain with a red label on it that included instruction (written in French) on how to use the plug. They also discovered newspaper clippings of articles relating to the German army or airships and notes full of numbers and letters.

Was this a secret craft of some ancient belonging to some country or did it belong to a civilization visiting Earth to explore and collect information? This case is also an example that in many cases the occupants of UFOs do not wan to interact with people.