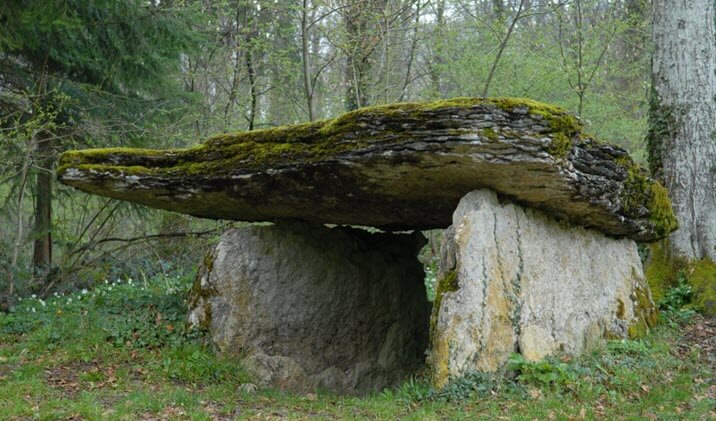 In the summer of 1956 a local woman (aged 52), was having an early morning walk (7am) along a broad path in the forest of Marsois (Haute-Marne France). While on the path and near the location where the dolmen of “Pierre Alot” stands, she noticed , some meters ahead (80 to 100 meters), two small individuals walking (one behind the other) towards her. At such a distance she assumed that they were children and without any suspicion she also continued to walk towards them.

When the distance was short enough (about 15 meters) for her to get a better view she halted. She could now see that they were not children nor normal human beings. The two individuals also stopped and began to look at her. The two beings were about 1.2 meters in height with a stocky body and short and thin legs. They wore a close-fitting white one-piece suit with no seams or buttons. Their hands were covered with black mittens. On their feet they wore black short boots and on their waist they had a broad belt (also black). No specific details on facial features could be distinguished as the beings wore a black round helmets with a visor over their face. Their movement were normal similar to that of a human being.

After a few moments of silence the woman could not resist and asked them: “Who are you?” The beings did not answer; they kept looking at her and moving their head up and down. Their behavior indicated curiosity and indifference towards the woman; as if they had to keep a distance from her. Then, they made a half turn and walked in to the bushes bordering the path, making their way through the vegetation. It was obvious that they did not to come closer and that their mission did not include close contact. The woman’s heart was beating fast but she did not panic, she watched until the two beings were out of the scene and then continued her walk.

On September 27th of the same year in the same area of Haute-Marne some locals witnessed a UFO. Between 7:15 and 7:30 pm a man driving along Route Nacional 65 (at Darmannes) saw a disc shaped UFO with a dome emitting blue lights; his car went dead and experienced a number of physical effects . On the same evening a carpenter on Route Nacional 67 saw an enormous luminous mass taking off and flying away. Could the above incidents be related to the humanoid encounter?

Information also indicates that locations in which dolmens are found are linked with mysteries such as witchcraft, ceremonies of all kinds, strange encounters with