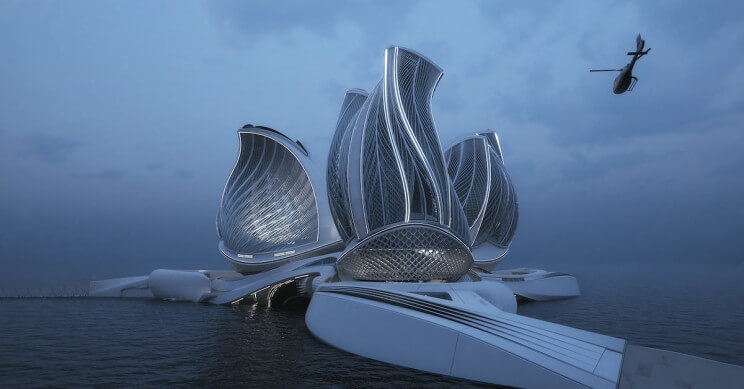 The award-winning concept collects ocean debris and then breaks it down to be recycled.

An impressive design concept called the 8th Continent is a floating station concept that offers to solve one of our planet’s most pressing issues: ocean waste.

Created by Lenka Petráková, the design collects ocean debris and then breaks it down to be recycled. It won the Jacques Rougerie foundation’s 2020 Grand Prix Award for Architecture and Innovation.

the University of Applied Arts in Vienna, Studio Hani Rashid where the project started its development

Petráková is a senior designer at Zaha Hadid Architects in London, and first developed her idea at the University of Applied Arts in Vienna, Austria, a few years ago after having studied ocean pollution.

The structure’s design and concept

Created to float on the Pacific Ocean, the 8th Continent is made up of five main parts:

The “continent” shifts according to its position, its inside environment, and the ocean’s movements. The entire platform is self-sufficient, using energy from the waves as well as the sun from solar panels above the greenhouses.

Petráková explained that she drew inspiration for her project from marine life — just like self-sustainable living aquatic organisms, the 8th Continent is fully self-sustainable, too.

Aside from being a marvel of architecture and design, it’s clear to see the concept’s main driver was our environment. As Petráková said to Euronews, “I realized how destroyed the oceans are and how many species are extinct, how much pollution is there, and that the parts that may have never seen a human being, feel the effects of our activities.”

Given the amount of plastic that ends up in our oceans is at least as high as eight million tons, as the International Union for Conservation of Nature pointed out, it’s designed like the 8th Continent, and other innovations, that will help bring awareness and make a change.