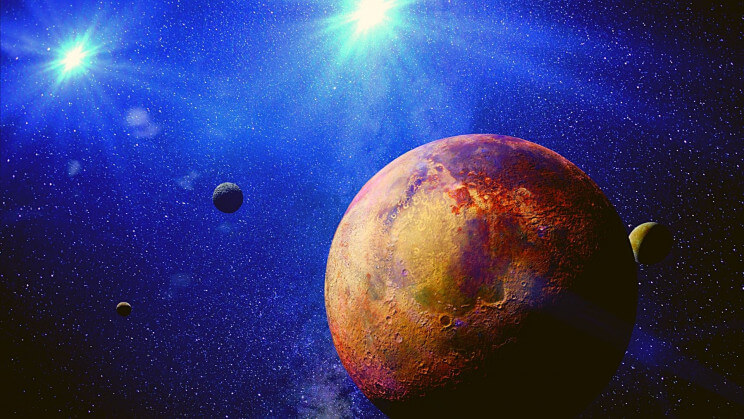 We just found ‘hot targets’ in the search for Earth 2.0.

Nearly half a century ago, the creators of the Star Wars franchise conceived of a habitable planet called Tatooine — a desert planet orbiting a pair of stars — on which intelligent life could bask in the light of a double-sunset. But scientists just found striking evidence pointing to five known systems with multiple stars — Kepler-34, -35, -38, -64, and -413 — all of which might support life, according to a new study published in the journal Frontiers in Astronomy and Space Sciences.

In other words, we just took five steps closer to potentially finding life beyond our solar system.

A newly developed mathematical framework enabled researchers at the University of Washington and New York University Abu Dhabi to show how these five systems — which are 2,764 and 5,933 light-years from Earth, within the constellations Cygnus and Lyra — each feature a permanent “Habitable Zone.” A habitable zone is a region of space near stars where liquid water can form and remain on the surface of an Earth-like planet. One of the systems, Kepler-64, has at least four stars orbiting each other at its center. But while the others have only two each, all are known to host at least one giant planet equal to or larger than the size of Neptune.

This serves as proof-of-principle that giant planets in binary star systems don’t rule out the possibility of habitable worlds.

“Life is most likely to evolve on planets located within their system’s Habitable Zone, just like Earth,” said Nikolaos Georgakarakos, a corresponding author of the study and research associate from New York University Abu Dhabi’s division of science, in an embargoed press release shared with Interesting Engineering. “Here we investigate whether a Habitable Zone exists within nine known systems with two or more stars orbited by giant planets. We show for the first time that Kepler-34 -35, -64, -413 and especially Kepler-38 are suitable for hosting Earth-like worlds with oceans.”

Scientists generally think most stars host planets, and the discovery of additional exoplanets has continually accelerated since 1992. As of writing, 4,375 exoplanets have been discovered — 2,662 of which were first detected via NASA’s Kepler space telescope during the telescope’s Milky Way survey mission, between 2009 and 2018. Additional Exoplanets were discovered with NASA’s TESS telescope, in addition to missions from non-U.S. agencies. Meanwhile, the European Space Agency aims to launch its PLATO spacecraft to “hunt” for new exoplanets on or before 2026.

Twelve of the exoplanets Kepler spotted are “circumbinary,” which means they have close orbits to a pair of fiery stars. Binary systems are everywhere in the universe, estimated to comprise half to three-quarters of all star systems. While observations have only confirmed giant exoplanets in orbit of binary systems, there are probably Earth-like planets and moons hiding out there, within binary systems’ habitable zones.

Giant planets are ‘hot targets’ in the search for Earth 2.0

Sadly, the gravitational interactions within multi-star systems — especially when giant planets are present — likely cut the chances for the origin and survival of life down. For example, such planets might collide with their host stars, or be flung out of orbit. Even the Earth-like exoplanets that survive early development will fall into elliptical orbits, which will create heavy cyclical changes in the intensity and spectrum of radiation.

“We’ve known for a while that binary star systems without giant planets have the potential to harbor habitable worlds,” said Professor Ian Dobbs-Doxon of New York University Abu Dhabi, who was also a study co-author.

The habitable zones around “The Five Kepler” star systems are between 0.4 and 1.5 Astronomical Units (AU, the distance from the Earth to the sun) wide, starting at distances from 0.6 to 2 AU from the center of their binary stars hosts’ combined mass. These systems will likely be the focus of much interest in the coming decade, as several new exoplanet-hunting telescopes are launched. But the bonus is the proof-of-concept, as Georgakarakos said: “Our study confirms that even binary star systems with giant planets are hot targets in the search for Earth 2.0. Watch out Tatooine, we are coming!”