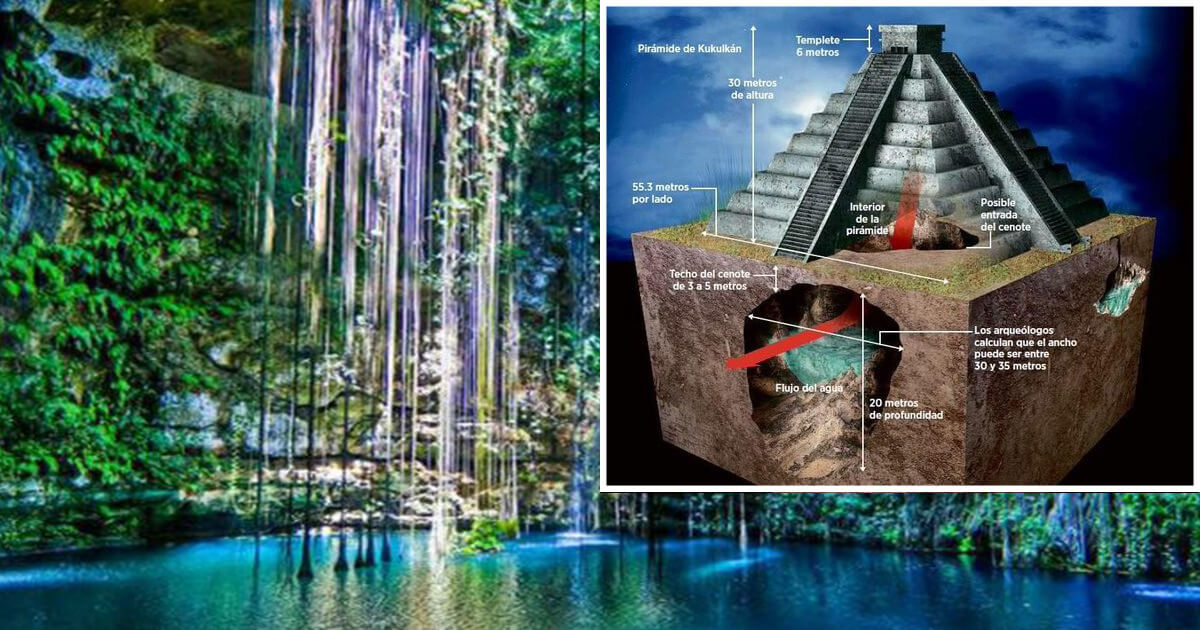 The ancient Mayans, who inhabited the Yucatan Peninsula in the first century after Christ, thought that there were three routes for the living to reach Xibalbá, the realm of the dead: deep caverns, Mayan ball competitions, and holy cenotes. The cenotes were so essential to ancient Mayan mythology that they believed both life and death originated from these subterranean caves.

A vast network of subterranean caverns connects the Yucatan Peninsula. Many of these caves are thought to have been created by meteorite strikes related to the huge meteor that led to dinosaur extinction during the Cretaceous-Tertiary mass extinction.

The limestone that makes up most of the peninsula has deteriorated over time, causing the earth to collapse into a water-filled cave. These are sinkholes, also known as cenotes, and it was because of this subterranean water supply that the inhabitants of Yucatan were able to thrive throughout the ancient Mayan civilization.

The ancient Maya were well aware of the critical role cenotes played in their continued existence. As a result, these sinkholes became shrines. In fact, Chichén Itzá, the renowned Mayan pyramid temple, was recently found to be constructed atop a huge cenote.

They thought that Kukulkán, the Mayan god, grew growing in the subterranean cave until it became so big that it burst through the earth’s surface in a massive earthquake and soared towards the sun.

In celebration of Kukulkán, the Mayans constructed the Kukulkán Pyramid, which is a work of art in and of itself (called El Castillo by the Spanish).

The pyramid was constructed to coincide with the Mayan calendar, demonstrating mastery of mathematics and astrology. Twice a year, the sun shines directly on the temple, casting a huge serpent’s shadow on the stairs.

It’s about Kukulkán, who may be seen descending from the sky for approximately 45 minutes, through a stairway that splits in two and the ground below. He’ll meet up with his brothers in Xibalbá there.

The Mayans thought that Xibalbá’s royal palace housed 12 deities, known as the Xibalbá deities. Hun-Camé (“One Death”) is at the top of the pantheon, followed by Vucub-Camé (“Seven Deaths”). The other eight are demon lords in charge of a certain kind of human misery.

With such a well-defined pantheon of demons, it’s understandable that the Mayans were worried about pleasing the people of Xibalbá. The Chichen Itza temple is said to have served as a venue for giving sacrifices to the gods, including human sacrifices.

Some wooden items, tools, and idols, as well as a vast variety of gems and valuable metals like as gold, silver, copper, and, most importantly, jade, were discovered when the cenote under the Kukulkán pyramid was excavated.

A significant number of the items seem to have been deliberately damaged before being thrown into the cavern, implying that the thing that was to be offered to the gods of death had been “slaughtered.” Many human bones with wounds suggestive of human sacrifice have also been discovered during excavations. Men, women, and children are among the dead.

A long-term drought plagued the Yucatan Peninsula, according to popular belief, which contributed to the Mayan civilization’s demise. As people pleaded with the gods to restore their “life-giving water from the ground,” this may have led to an increase in the quantity and value of offerings.

According to new research, the cenote may be expanding in size and its limestone walls are deteriorating. Archaeologists are concerned that the Pyramid of Kukulkán may collapse in the cavern, causing the limestone soil to deteriorate further. The important platform is now just 16 feet (5 meters) thick.

Dr. René Chávez Segura, a geologist from Mexico’s National Autonomous University, said that “these kinds of formations alter over time because the water in the walls and cavity may increase.”

“If the thickness of the rock under the pyramid thins, there may be a stability issue, and ‘El Castillo’ may collapse at some time.” Dr. Chávez, on the other hand, believes that this is unlikely to happen very soon.