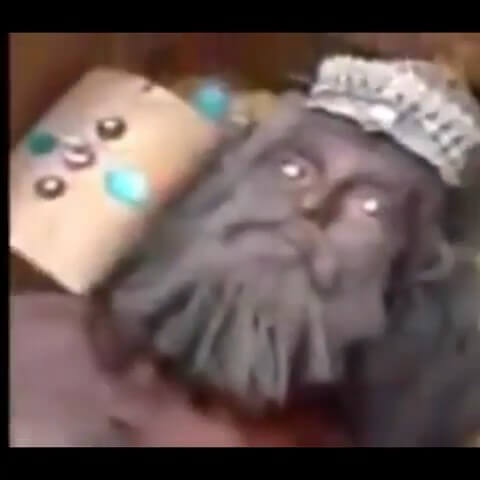 Wow, this could change everything in terms of what we know to be our ancient past “timeline of events” and people who lived back then and the technology we thought was used back then. This is a Nephilim king, who was awakened when he was discovered in Iran.

There was also another ancient King that was awakened but he apparently never made it. This is a big story and it has many layers to it.This is one just one of the King’s that was kept “biologically alive”whatever that means and there are other’s which have been awakened and have been relocated.

The eyes are still looking up and they seem to appear “OK” and they have a glass like appearance to them. The body is in good shape and the colored lights around the top of the sarcophagus are on.
Real video evidence of the infamous sleeping Nephilim. The first shown was unearthed by accident and subsequently died of exposure shortly after, the second is still preserved within stasis and is biologically active. These beings are waking up all around the world! Many have already been secretly relocated somewhere else by covert government operations
Is this something the King was aware of, did he indeed order this upon himself and is this something which can be replicated in today’s world with our understanding?
This is totally intriguing, hope you enjoy,
Thank You,
Nancy Thames
Share on social media Share on FacebookShare on TwitterShare on LinkedinShare on PinterestShare on XingShare on Reddit