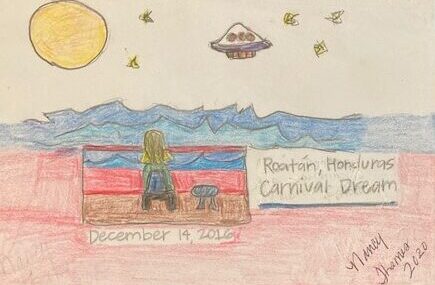 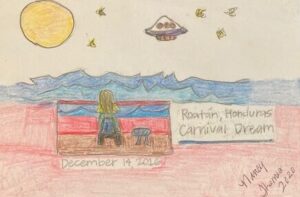 This is when and where my Grandson was conceived for my youngest Son and his soon to be fiancée and the mother of his son. Just before Christmas 2016 I witnessed a Spaceship following us on our way back from Honduras to New Orleans on Carnival Cruise Line boat named Dream. We were staying in different cabins but on the same side of the boat. When we got to Honduras we went ashore and earlier that day my daughter-in-law experienced a odd reaction in the Ocean water and felt extremely ill. We were in a rented vehicle riding along the Coast line and it suddenly hit her so we headed back to the Cruise boat to go to the infirmary but she managed to pull out of it but we proceeded to go back on board just in case anything else occurred. That night I saw a spacecraft following us and in my mind and in a dream I was told I was going to get a grandson. On our way back home I told My son she’s pregnant with my grandson and he laughed and said we used precautions, I said you will see I am right, and told him about my dream, and the spacecraft following us . On January 28th she found out she was pregnant and both were shocked but very excited . He was born in September 2017 and he is a remarkable little boy at two he can count to. 20 and say his AbC’s and has learned sign  language even though he has no speech or hearing problems and uses both his right and left hand to write, draw etc. and uses both feet to kick a soccer ball. He has an iPad and gets around on it better than I do on mine. I truly believe they are both hybrids my son and my daughter in law and so is my grandson. My son was born with O positive blood and his father and I Were both A positive which is a rare occurrence to have a O positive baby. His son was born O positive same as him but his mother A negative and had to be given a RhoGAM shot at 26 weeks then after his birth another one after 72 hours. This is very rare Occurrences in both my son and with his wife. But the injections helped her have a normal pregnancy. However with my son and grandson it’s was unknow until they were born what their blood types would be but something in our DNA allowed it or was their a intervention from alien sources ? And possibly the same with his son ?