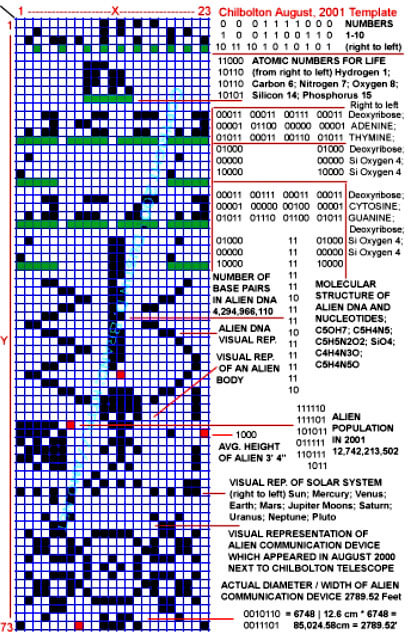 On November 16, 1974, the radio telescope was modernized at the Puerto Rican observatory Arecibo. Astronomers decided to celebrate this event extraordinarily. They recorded a signal lasting 169 seconds and sent it to the distant star cluster M13. In theory, the signal can reach potential recipients only after 25,000 years, but the answer unexpectedly came earlier.

As it turned out, the message of mankind received a response as early as 2001. A mysterious figure appeared in the field next to the telescope of the Chilbolton Observatory (Great Britain). Skeptics immediately began to prove the earthly origin of the drawing, supposedly hooligans or conspiracy theorists independently made patterns on the field next to the observatory. But these were not ordinary drawings.

The main feature of the Chilbolton case was the meaningfulness of the message. It took time, but scientists were able to decrypt the encryption. It turned out that the message almost completely repeats the sent signal, with the exception of some important details.

In the radio message sent from the Earth, the numbers of atomic elements, which are the “bricks” of life, were encrypted. Here, only silicon (Si) was inserted into the input data set, moreover, in compliance with its atomic mass.

As you know, man and the rest of life on the planet are carbon. However, life is allowed on the basis of other elements – phosphorus or silicon. Perhaps the message just says that silicon is the fundamental element in the structure of aliens.

In addition, it was possible to decipher the number of chains in the alien DNA (more than 4 billion) and the population of this race – more than 12 billion individuals.

The main argument of the skeptics is that the aliens physically could not give an answer. The radio signal moves at the speed of light, so from 1974 to 2001, it covered a distance of only 27 light-years. And do not forget that time is needed for an answer.

There may be several explanations. First, the recipient was within 14 light-years, so it managed not only to receive the message but also to send an answer. What if a star system with potentially inhabited planets was located on the way to M13?

Another option is that highly developed races may have quantum transmitters in different parts of space. As it is known, due to quantum entanglement, information can be transmitted instantly at any distance. It is possible that one of these stations caught the radio message and transmitted it to the recipient with lightning speed into the depths of space. According to this logic, somewhere in a radius of 27 light-years from Earth, this same transmitter can be located.

In any case, the answer was deliberate, which allows an unambiguous conclusion. They listen to us and readily answer.