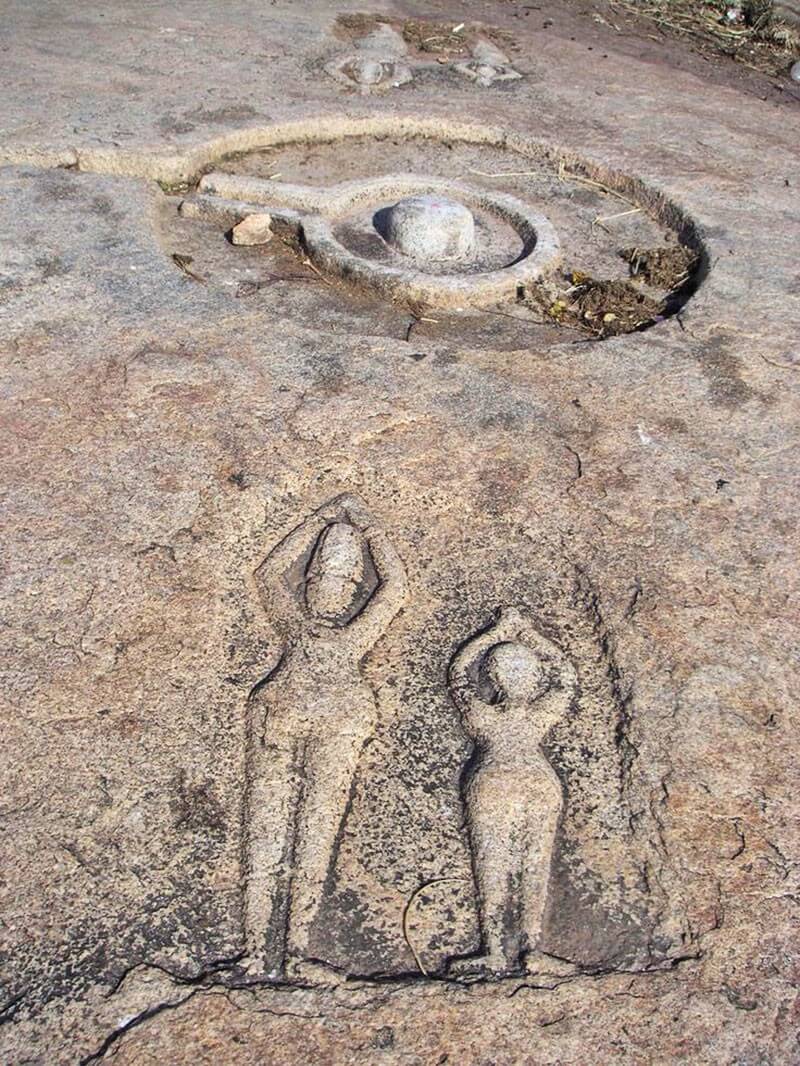 The Book “Chariots of the Gods?” by Erich Von Daniken laid the groundwork for what is now called the Ancient Astronaut Theory. The main idea behind this book is that ancient man confused aliens for gods and humans began to worship aliens as if they were gods. His books go into great detail giving many examples of why this could be true. I think that it is perfectly plausible that humans would mistake aliens for gods. What I want to know is if aliens created religion themselves and posed as gods or if humans did it themselves.

Like Von Daniken’s books, you will see a lot of question marks in this article. My reasoning is the same as his. The purpose of this article is to promote thought and conversation, not to answer questions. If I had proof of why aliens do what they do, did what they did or even exist at all, then I would be a rich man. All I can do is look at history without blinders on to try and see what all the possible scenarios are. Common sense can take you far when you are willing to use it.

The Ancient Astronaut Theory talks a lot about how God could be aliens, but they never seem to ask if the aliens did this on purpose. The theory is more aimed at explaining why people mistook aliens for God. This topic starts to get a little tricky at this point. In order to discuss the effect that aliens had on religion, we have to make a few assumptions. First, we have to assume that the Ancient Astronaut Theory is correct and people did mistake aliens for gods. Second, we have to assume that the people that recorded religious history did so accurately.

Did Ancient Man Actually Interact With Aliens Or Did They Just Witness Them?

This entire discussion basically hinges on this question. Did the ancient men actually interact with the aliens or did they simply witness them and take it from there themselves? This is where the accuracy of recorded religious history becomes important.

The Christian Bible has many instances of people actually talking to God. The entire idea behind the book is that God wants people to live a certain way and he tells them exactly what this way is. There are groups of people anointed by God that go around telling other people what God wants. There is no denying that these people believe that God actually speaks to them. They don’t walk around assuming what God wants them to do. God told them what he wanted them to do.

If these people actually received instructions from God and we are assuming that the Ancient Alien Theory is correct then we come to the conclusion that aliens did create religion. If we replace God with aliens in the Bible then the aliens wanted humans to follow a certain code and they told them what the code is. If the Bible and the Ancient Alien Theory are both true then an alien literally handed Moses the Ten Commandments.

We can dissect this theory endlessly by debating which parts of the Bible might be true and which parts are probably made up. That is not the point of this article though so we are not going to do that. The point that I am trying to make is that it appears like aliens intentionally influenced man by convincing them that they were gods. After they had men believing that they were gods then they ordered them to follow a certain set of rules. This idea isn’t limited to the Bible either. Throughout history, there has been a pattern across the world of god-like beings telling humans how to act.

What Would Aliens Gain From Creating Religion?

The next logical question we would ask is why would aliens want to create religion? One possibility is simple really. Aliens may have created religion to use it the same way that the Catholic Church has been using it for over a thousand years. They wanted to control people.

There is only one thing that can scare a person more than death. This thing is an eternity of painful existence in the most horrible place imaginable. Hell. Telling someone that you must do what I tell you to or else I will torture you for the rest of time, is the ultimate of threats. Many churches push this fear constantly on their members. Do what God says or else! If the aliens (God) could convince people that they have the power to torture their souls forever then they could get them to do anything that they want. Did they do this for their benefit or ours?

There are other reasons that aliens may have wanted to create religion. Aliens may have been visiting Earth since the time of cavemen. Aliens could have created religion in order to help people live together peacefully. They could have played off of humans’ natural belief in a higher power to do this. Imagine if, around four or five thousand years ago, aliens came down out of the sky in a UFO. When they landed they told the people that they had to follow certain rules or else they would come back and hurt them. People definitely would have listened to them. After that, humans may have taken the story and ran with it. The entire process could have started with only one encounter. Many of the world’s religions come from the same set of ideas. The question is; was this place really from aliens?

Do Aliens Know Something That We Don’t Know About God?

It is possible that aliens know something about God that we humans don’t know. Maybe they have advanced far enough intellectually that they reached an entirely different level of comprehension about God than we have. Maybe they flew to the edge of the Universe and saw firsthand what created it. Have aliens created a technology that can contact the dead or do they have a tree of souls where they can talk to Eywa like on Avatar?

The different possible scenarios for aliens’ concepts of God are almost endless. Many people think that the existence of aliens means that God doesn’t exist. I think that humans have a narrow concept of God. Aliens could help bring us closer to understanding God or they may have found a way to disprove him/he/she/it. All I know for sure is that asking an alien about God would be one of my first questions if I could ever ask them one.

Another possible scenario is that aliens helped create religion but didn’t do so intentionally. This is a very simple idea. The idea is that humans witnessed aliens and assumed that they were gods without the aliens giving them any input on the matter themselves.

Ancient people from all across the world have witnessed strange things in the sky. These sightings are not just limited to the bible. The Japanese and Indian cultures are full of stories about UFOs. Native Americans, Azteks and the Chinese all have stories that can be interpreted as aliens or UFOs too. It wouldn’t take much for an ancient man to see a UFO and run away with the idea that it must be a god. This could even explain where the Greeks came up with the idea of Zeus.

Aliens literally could have helped create religion simply by flying across the sky in a spacecraft. A UFO sighting is life-changing today and we are a lot more used to technology than someone that lived thousands of years ago would have been. Witnessing a UFO would really have been a “religious experience” to someone in 3,000 B.C. Possibly the beginning of religious experiences!

What I Personally Believe About Ancient Aliens And Religion

I haven’t covered all the possible scenarios of how aliens could have influenced religion but I think that you get the idea I am driving for. It is important to be open-minded and to look at all angles of an argument. I do lean in one direction more than others just like anyone else though. I have spent a lot of time thinking about aliens and religion and this is what I personally think happened.

I think that ancient man did encounter aliens. These aliens decided to help people by giving them a set of rules to live by. They used our natural belief in God to emphasize how big of a deal following these rules was. After the aliens planted the seed of religion, humans took it from there. The aliens went around the world and did the same thing with other groups of humans. They tailored this process to each society’s natural beliefs.

I don’t know how long the aliens stuck around for but at some point, they left (or at least stayed well hidden). Leaving may have been part of their plan or some other alien species could have forced them to leave. Either way, I think that aliens gave us the basic skills we needed to advance our civilizations. The push that we needed from them at that time was in the form of religious beliefs. An advanced species of aliens would understand the different steps that societies go through in order to advance. Helping us with these steps would set humans ahead thousands of years.

The aliens didn’t stop at religion though. As time went on, aliens realized that people would no longer see them as gods. They wanted to continue helping humans though so they had to find new ways. The latest way that they help us is with our technology. Aliens had to wait until our own technology was advanced enough for us to be able to reverse engineer theirs before this plan would help us. When we made it to this point, they crashed a few UFOs on Earth. These UFOs were a gift to us. Crashing a few UFOs on Earth for us to study put our civilizations ahead another few thousand years.

I bet this UFO gifting didn’t just happen at Roswell but it probably happened in almost all major countries. There is a story about the Russians shooting down a UFO in the 50s. I never bought this story because how could a 1950s jet shoot down a UFO? Aliens are way too advanced to have lost a UFO in such a scenario. It is possible that the aliens let them shoot down the UFO on purpose. Maybe the UFO was crashing already when the Russian plane came up to it.

When I think about the history that we share with aliens I get excited about the future. I wonder what the next step in their plan for us is and what the next bit of technology will be that they show us. I think that, at some point, they will see us as their equals. Or at least close to equals. Maybe we will find out then that there is a cohabitation of different species of advanced life from all across the Universe. I think that we have yet to prove our worth to the aliens. Maybe they are waiting for our entire planet to work together as one unit before they will take us to the next level. That could be a really long time from now.