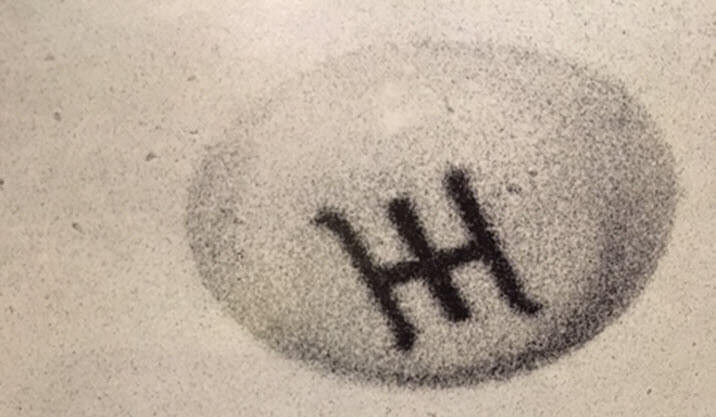 Ufologists are always looking for similarities between independent UFO cases as proof that testimonies are credible. Similarities between incidents provide reliable indication that the experience is real and not imagined. One of the most exciting patterns ever observed in ufology is that of the “H”-like symbol. The symbol has been observed on unidentified alien craft (usually on the bottom part) or on the suits worn by the crew.

The symbol (see main picture), appears like an H with a vertical line in the middle and with a slight curve on the side lines. From the available testimonies we know that there have been slight variations of the symbol throughout the years.

The most popular case bearing this symbol is the Voronezh incident that took place in Russia during September of 1989 . The incident became international news as the Soviet news agency in charge decided to share the news with the whole world. The witnesses, among other things described the “H”-like symbol. Below a collection of drawings based on testimonies from the Voronezh incident, the symbol appeared on the craft belly and on the belts of the crew.

In the 1960’s we have the emergence of the Ummo phenomenon in Spain in which the symbol reached its maximum exposure. According to the information available, in 1966, a number of individuals began to receive letters from a supposed alien race claiming to come from a planet by the name of Ummo. These letters that beard the symbol, provided information about life on planet Ummo and their technology. The main picture of this article comes from a 1967 sighting near Madrid.

An Ummo letter received on May 1967 was made public to a wider group of letter recipients later that month (May 30th). In this letter, the Ummites shared information about the location (area, coordinates, approximate radius and margin of error) of upcoming landings of their craft. The locations outlined were Bolivia (Oruro), Spain (wider Madrid area) and Brazil (Rio Grande do Sol). On June 1st and 2nd, reports came in about a UFO sighting in San José de Valderas (near Madrid); a local newspaper spread the story and photos of the UFO. The symbol was clearly seen on the picture (main picture is from the San José de Valderas sighting).

At that time nobody was able to confirm sightings in Bolivia and Brazil. Let´s not forget that in the 60s the world was less connected and information was not shared so easily. Years later, in 1993 Jordan Peña one of the recipients of the Ummo letters announced that he was behind the Ummo case; everything was just a well executed social experiment; the letters and Madrid photos were fake; the symbol was made up by him. Some of the serious investigators started looking in to the case again and collected proof that Peña was lying. Let´s not forget that the Voronezh case alone is enough to provide evidence that Peña was lying as tens of witnesses saw the symbol 6 years after his announcement.