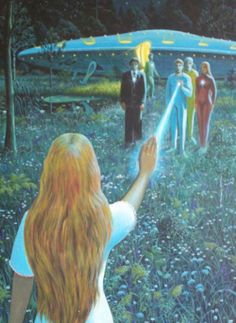 Pleiadians are similar to us, but much more advanced spiritually and technologically. They are in constant contact with us and are gently providing information to help us through our transformation from third to fourth density.

“Pleiadians, also known as Nordic aliens, are humanoid aliens that come from the stellar systems surrounding the Pleiades stars, and they’re really really really concerned about Earth and our future. (Since the Pleiades are a pretty group of stars and since they’re even more beautiful through telescopes, anything connected with them has to be good and kind, right?) So concerned are they, they’ve contacted certain special people to channel them and convey their message. Which isn’t always consistent. The Pleiadians either came from a group called the Lyrans, or coexisted with the Lyrans, or the distinctions between Lyran, Pleiadian, and Sirians don’t really exist. Native Americans are of Pleiadian descent, or white people are of Lyran descent, or humans are of no notable relation to either. They can either switch between the third and the ninth dimension, or they exist solely in the fifth dimension (which is apparently made of love and creativity), or just live in non-specific dimensions higher than three. Basically, the only things generally agreed upon by the Pleiadians themselves is that they want to help Earth and let humanity ascend to higher dimensions. Pleiadians are supposed to be better looking versions of us. They nearly always lack pigmentation in their skin and hair, giving them an albino appearance. Many Pleiadians have an Asian appearance similar to grays. As a rule, Pleiadians don’t carry around much excess fat, although females are known to have curvy figures. They don’t usually have curly hair or beards.”

We have a lot to learn from these beings just as the Native Americans did. Hopefully they help up in this time of Great Need and Ascension.