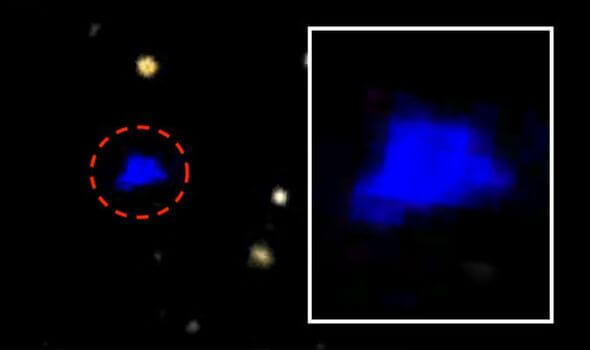 The supposed alien UFO was spotted after analyzing photos of the night sky compiled by NASA’s Hubble Space Telescope and Google Sky. What first appears to be nothing more than a mess of blue pixels, could be an extraterrestrial discovery of epic proportions. According to self-titled UFO expert and conspiracy theorist Scott C Waring, the mystery object is a planet-sized space station constructed by immortal alien beings.

Mr Waring, who runs the blog UFO Sightings Daily, said: “This three-dimensional object in space is 100 percent proof that aliens create structures that are as big as planets.

“Why limit yourself to a round planet when you can make any design you desire?

The object in question was found using Google Sky – a celestial map of the night sky that reveals the locations of stars, constellations, galaxies and planets.

UFO sighting: Could this be an alien space station as big as a planet? (Image: UFO SIGHTINGS DAILY)

He said: “I found it using Google Sky map, just copy paste the coordinates into it and you will find it.

“It’s the same map as Google Earth and Mars maps, but you have to hit the button and choose sky.”

However, this is not the first time he has made such bizarre claims about alien life.

In May this year, the UFO hunter shared photo evidence of what he claimed was a “fleet of UFOs” coming out of an underground base.

And two years ago, he shared a pixelated photo of what he believed was a Borg-like alien cube near the Sun.

He said of his latest discovery: “How could such a huge constructed object even exist?

“Easy, you think in terms of 100 years being a long time… relative to our lifespan.

“However many alien species live forever, unless an accident befalls them. So time means little to them.

“They give the order to the AI androids and check back on it in a few thousand years… long to us, but a mere few weeks to them.”

And yet, there is absolutely no evidence to substantiate Mr Waring’s theories.

As far as we can tell, Earth is the only place in the solar system where advanced life has developed.

But there is an explanation for why Mr Waring so frequently spots aliens and UFOs in unrelated phenomena – pareidolia.

“It’s a form of apophenia, which is a more general term for the human tendency to seek patterns in random information.

“Everyone experiences it from time to time.

“Seeing the famous man in the moon is a classic example from astronomy.”