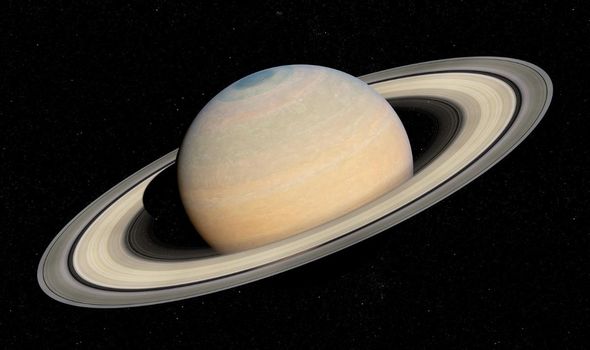 Saturn’s moon Iapetus may look completely devoid of life, but one UFO researcher believes it is home to alien beings. The shock claim is being made after a strange structure, believed to be at least five kilometers in length, was spotted on Saturn’s third-largest moon.

Not only does one alien researcher claim to have spotted the structure on Iapetus, one of 62 moons which orbit the ringed giant Saturn, but added that NASA is attempting to cover up the evidence.

Prominent alien hunter Scott C Waring made the claim on his blog ET Database, stating: “I was using an app on my iPhone called Saturn Atlas when I noticed a huge black structure on the moon Iapetus.

“The structure is massive, about 5km across, 4km wide and 1.5km tall.

“The area is totally blurred out by NASA to hide it, but it still stands out very well. I have searched many other photos of this moon, none of them still have this structure.

“This app uses an old NASA index which no longer has those photos there, but lucky for us, the app has not updated or changed them.

“100 percent proof that aliens exist and thrive on a moon of Saturn.”

However, skeptics and NASA say the structure and other similar findings are just the effects of pareidolia – a psychological phenomenon when the brain tricks the eyes into seeing familiar objects or shapes where they do not exist.

But Mr Waring has argued that humanity has the strength to deal with such a shocking alien revelation if NASA were to admit it.

He said: “Much like COVID-19 did to the people in each country as it spread, because the public once believed that such a pandemic would be impossible, and yet, the human race has changed their perspective on that very fast.

“That’s how disclosure of intelligent aliens would be, but it would not kill people or frighten them as much.”

One of NASA’s former top engineers previously said that “living alien UFO spaceships” are using the rings of Saturn as a hiding spot and that they are “proliferating” at an alarming rate.

The former NASA employee has previously said that the amount of spaceships has reached “critical” levels and that authorities should keep an eye on it.

He added the rings have become so compact with UFOs that they are now starting to gather around the likes of Jupiter and Neptune.at there are alien spaceships hiding in Saturn’s rings.

The claim was made by Dr Norman Bergrun, a well respected engineer who held a position at NASA’s Ames Research Center.