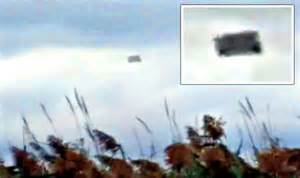 UFO hunters have excitedly shared an extraordinary new video purporting to show an alien craft over the US.

Bizarre amateur footage supposedly showing an oddly-shaped alien UFO hovering over the Midwestern US wilderness has gone viral online. Uploaded to YouTube only last week, the 90-second clip clearly shows an anomaly apparently flying near a road in Indiana.

The black UFO is scanning the area, stopping and going slowly

The conspiracy theorist took to his UFO Sightings Daily site to speculate if it was a UFO.

He said: “This is a great video, it does shake a bit, because using a zoom causes a little shaking to seem like a lot.

“The black UFO is scanning the area, stopping and going slowly.

“You can hear the man’s effort to hold the camera still and his dismay at what it might be.

“So great that he got the footage that he did.

“It shows the UFOs movement, speed, stopping, color, and shape.

“The one piece of evidence that confirms it is a intelligently-powered craft is that the wind is blowing in the opposite direction than the UFO.

Watch the grass bending over to understand direction of wind.

Mr Waring also included a brief statement he claims is attributed to the eyewitness.

They are quoted as saying: “I’m a truck driver walking back to my truck when I saw this.

“I went to find a higher viewpoint and it was gone. UFO? alien? Drone? A square bird?”