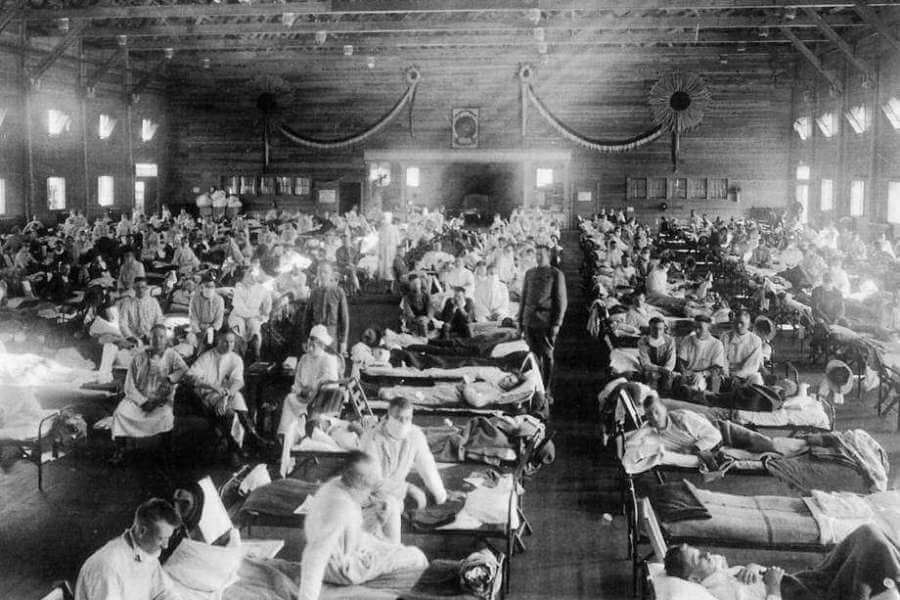 In the realm of infectious diseases, a pandemic is the worst case scenario. When an epidemic spreads beyond a country’s borders, that’s when the disease officially becomes a pandemic.

Communicable diseases existed during humankind’s hunter-gathererdays, but the shift to agrarian life 10,000 years ago created communities that made epidemics more possible. Malaria, tuberculosis, leprosy, influenza, smallpox and others first appeared during this period.

The more civilized humans became, building cities and forging trade routes to connect with other cities, and waging wars with them, the more likely pandemics became. See a timeline below of pandemics that, in ravaging human populations, changed history.

The earliest recorded pandemic happened during the Peloponnesian War. After the disease passed through Libya, Ethiopia and Egypt, it crossed the Athenian walls as the Spartans laid siege. As much as two-thirds of the population died.’

The symptoms included fever, thirst, bloody throat and tongue, red skin and lesions. The disease, suspected to have been typhoid fever, weakened the Athenians significantly and was a significant factor in their defeat by the Spartans.

The Antonine plague was possibly an early appearance of smallpox that began with the Huns. The Huns then infected the Germans, who passed it to the Romans and then returning troops spread it throughout the Roman empire. Symptoms included fever, sore throat, diarrhea and, if the patient lived long enough, pus-filled sores. This plague continued until about 180 A.D., claiming Emperor Marcus Aurelius as one of its victims.

City dwellers fled to the country to escape infection but instead spread the disease further. Possibly starting in Ethiopia, it passed through Northern Africa, into Rome, then onto Egypt and northward.

There were recurring outbreaks over the next three centuries. In 444 A.D., it hit Britain and obstructed defense efforts against the Picts and the Scots, causing the British to seek help from the Saxons, who would soon control the island.

First appearing in Egypt, the Justinian plague spread through Palestine and the Byzantine Empire, and then throughout the Mediterranean.

The plague changed the course of the empire, squelching Emperor Justinian’s plans to bring the Roman Empire back together and causing massive economic struggle. It is also credited with creating an apocalyptic atmosphere that spurred the rapid spread of Christianity.

Recurrences over the next two centuries eventually killed about 50 million people, 26 percent of the world population. It is believed to be the first significant appearance of the bubonic plague, which features enlarged lymphatic gland and is carried by rats and spread by fleas.

Though it had been around for ages, leprosy grew into a pandemic in Europe in the Middle Ages, resulting in the building of numerous leprosy-focused hospitals to accommodate the vast number of victims.

A slow-developing bacterial disease that causes sores and deformities, leprosy was believed to be a punishment from God that ran in families. This belief led to moral judgments and ostracization of victims. Now known as Hansen’s disease, it still afflicts tens of thousands of people a year and can be fatal if not treated with antibiotics.

Responsible for the death of one-third of the world population, this second large outbreak of the bubonic plague possibly started in Asia and moved west in caravans. Entering through Sicily in 1347 A.D. when plague sufferers arrived in the port of Messina, it spread throughout Europe rapidly. Dead bodies became so prevalent that many remained rotting on the ground and created a constant stench in cities.

England and France were so incapacitated by the plague that the countries called a truce to their war. The British feudal system collapsed when the plague changed economic circumstances and demographics. Ravaging populations in Greenland, Vikings lost the strength to wage battle against native populations, and their exploration of North America halted.

Following the arrival of the Spanish in the Caribbean, diseases such as smallpox, measles and bubonic plague were passed along to the native populations by the Europeans. With no previous exposure, these diseases devastated indigenous people, with as many as 90 percent dying throughout the north and south continents.

Upon arrival on the island of Hispaniola, Christopher Columbus Encounters  the Taino people, population 60,000. By 1548, the population stood at less than 500. This scenario repeated itself throughout the Americas.

In 1520, the Aztec Empire was destroyed by a smallpox infection brought by African slaves.

Research in 2019 even concluded that the deaths of some 56 million Native Americans in the 16th and 17th centuries, largely through disease, may have altered Earth’s climate as vegetation growth on previously tilled land drew more CO2 from the atmosphere and caused a cooling event.

In another devastating appearance, the bubonic plague led to the deaths of 20 percent of London’s population. As human death tolls mounted and mass graves appeared, hundreds of thousands of cats and dogs were slaughtered as the possible cause and the disease spread through ports along the Thames. The worst of the outbreak tapered off in the fall of 1666, around the same time as another destructive event—the Great Fire of London.

The first of seven cholera pandemics over the next 150 years, this wave of the small intestine infection originated in Russia, where one million people died. Spreading through feces-infected water and food, the bacterium was passed along to British soldiers who brought it to India where millions more died. The reach of the British Empire and its navy spread cholera to Spain, Africa, Indonesia, China, Japan, Italy, Germany and America, where it killed 150,000 people. A vaccine was created in 1885, but pandemics continued.

Starting in China and moving to India and Hong Kong, the bubonic plague claimed 15 million victims. Initially spread by fleas during a mining boom in Yunnan, the plague is considered a factor in the Parthay rebellion and the Taiping rebellion. India faced the most substantial casualties, and the epidemic was used as an excuse for repressive policies that sparked some revolt against the British. The pandemic was considered active until 1960 when cases dropped below a couple hundred.

After Fiji ceded to the British Empire, a royal party visited Australia as a gift from Queen Victoria. Arriving during a measles outbreak, the royal party brought the disease back to their island, and it was spread further by the tribal heads and police who met with them upon their return.

Spreading quickly, the island was littered with corpses that were scavenged by wild animals, and entire villages died and were burned down, sometimes with the sick trapped inside the fires. One-third of Fiji’s population, a total of 40,000 people, died.

The first significant flu pandemic started in Siberia and Kazakhstan, traveled to Moscow, and made its way into Finland and then Poland, where it moved into the rest of Europe. By the following year, it had crossed the ocean into North America and Africa. By the end of 1890, 360,000 had died.

The avian-borne flu that resulted in 50 million deaths worldwide, the 1918 flu was first observed in Europe, the United States and parts of Asia before swiftly spreading around the world. At the time, there were no effective drugs or vaccines to treat this killer flu strain. Wire service reports of a flu outbreak in Madrid in the spring of 1918 led to the pandemic being called the “Spanish flu.”

By October, hundreds of thousands of Americans died and body storage scarcity hit crisis level. But the flu threat disappeared in the summer of 1919 when most of the infected had either developed immunities or died.

Starting in Hong Kong and spreading throughout China and then into the United States, the Asian flu became widespread in England where, over six months, 14,000 people died. A second wave followed in early 1958, causing an estimated total of about 1.1 million deaths globally, with 116,000 deaths in the United States alone. A vaccine was developed, effectively containing the pandemic.

First identified in 1981, AIDS destroys a person’s immune system, resulting in eventual death by diseases that the body would usually fight off. Those infected by the HIV virus encounter fever, headache, and enlarged lymph nodes upon infection. When symptoms subside, carriers become highly infectious through blood and genital fluid, and the disease destroys t-cells.

AIDS was first observed in American gay communities but is believed to have developed from a chimpanzee virus from West Africa in the 1920s. The disease, which spreads through certain body fluids, moved to Haiti in the 1960s, and then New York and San Francisco in the 1970s.

Treatments have been developed to slow the progress of the disease, but 35 million people worldwide have died of AIDS since its discovery, and a cure is yet to be found.

First identified in 2003 after several months of cases, Severe Acute Respiratory Syndrome is believed to have possibly started with bats, spread to cats and then to humans in China, followed by 26 other countries, infecting 8,096 people, with 774 deaths.

SARS is characterized by respiratory problems, dry cough, fever and head and body aches and is spread through respiratory droplets from coughs and sneezes.

Quarantine efforts proved effective and by July, the virus was contained and hasn’t reappeared since. China was criticized for trying to suppress information about the virus at the beginning of the outbreak.

SARS was seen by global health professionals as a wake-up call to improve outbreak responses, and lessons from the pandemic were used to keep diseases like H1N1, Ebola and Zika under control.

On March 11, 2020, the World Health Organization announced that the COVID-19 virus was officially a pandemic after barreling through 114 countries in three months and infecting over 118,000 people. And the spread wasn’t anywhere near finished.

COVID-19 is caused by a novel coronavirus, the family of viruses that includes the common flu and SARS. Symptoms include respiratory problems, fever and cough, and can lead to pneumonia and death. Like SARS, it’s spread through droplets from sneezes.

The first reported case in China appeared November 17, 2019, in the Hubei Province, but went unrecognized. Eight more cases appeared in December with researchers pointing to an unknown virus.

Many learned about COVID-19-19 when ophthalmologist Dr. Li Wenliang defied government orders and released safety information to other doctors. The following day, China informed WHO and charged Li with a crime. Li died from COVID-19 just over a month later.

Without a vaccine available, the virus spread beyond Chinese borders and by mid-March, it had spread globally to more than 163 countries. On February 11, the infection was officially christened COVID-19.

We have had to deal with this so many times but this is the most Global Pandemic ever. Be strong and be safe follow CDC  guidelines. Take care of yourself and your family. Do some Research on the Disclosure and the fact We have never been  Alone.