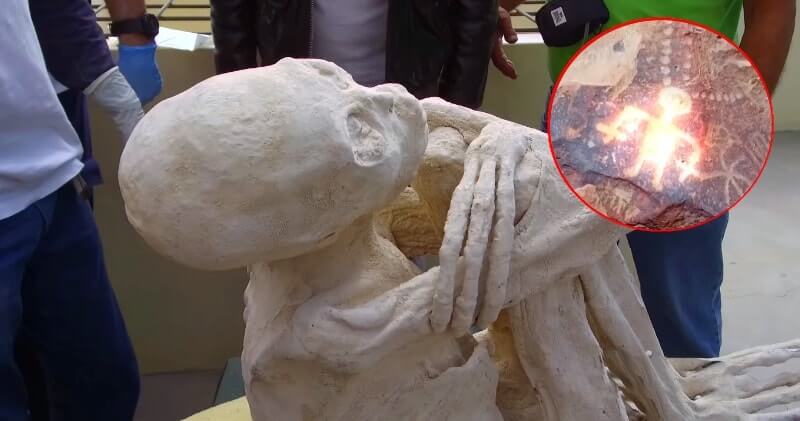 “At first sight, it looked like a normal body but looking closely at every body part we found could find several abnormalities.
“For example, the head is bigger, it has wider eyes, a smaller nose, and it has no ears. It has fewer vertebrae that a common human…”
The mummified remains discovered in Nazca Peru have created a massive debate among Alien believers, and researchers around the globe.

The scientific community was left awe-struck when UFO hunters and a group of researchers released a statement claiming they had come across the mummified remains of the mummified remains of several alien bodies at an undisclosed cave at Nazca, Peru .
Soon after the statement was made, the scientific community struck the claims and tagged the entire thing as a hoax, saying that the alleged mummies were in fact fabricated, and were never actually discovered.
These comments were made despite the fact that skeptical scientists never took a look at the mummies, nor did they analyze them thoroughly.
Nevertheless, as the scientific community stood up against the story, most people believed they were probably a hoax, despite the fact that Mr. Jaime Maussan — a UFO researcher and journalist from Mexico — and his team provided evidence suggesting the mummified remains found in Peru were not ordinary human beings.
Now, months after the mummies were found and analyzed by independent laboratories around the globe, a second scientist has studied the bodies discovered in Peru and said that they are not a hoax.
Dr. Jose Benitez, a doctor of forensic medicine, and member of the team studying the mummified remains has made shocking claims about the mysterious remains discovered in Peru.
Benitez is the second scientists to put his reputation at stake by saying that the mummified remains could in fact be aliens or a least a new species we haven’t encountered before on Earth.
The first scientists to make the same claims was Dr. Edson Vivancoa, a skeletal specialist, who concluded after studying the remains, they were not human.

Alexander : Something very important to understand about carbon-based life
Humans share 50% of our working DNA with a banana, 90% with cats, 97.5% with mice, 98% with gorillas, and 98.6%-99% with chimpanzees. This means that only around 1% of the DNA is what separates us from chimps. And what a colossal difference that 1% makes!
It is very important to note that the now-extinct Neanderthals and Denisovans, were so similar to us that healthy, fertile baby hybrids could be born through interbreeding.
It is also very important to note that all human beings are 99.9% identical in their genetic makeup. The remaining 0.1% is what makes us different.
So, it is be expected that carbon-based aliens have a very similar DNA to ours as well.
Now that we have a better understanding about the DNA, I suggest you read this article as well: New DNA Updates On The Potential Alien Body Found In Nazca, Peru (It’s Not Fake And Not Human)