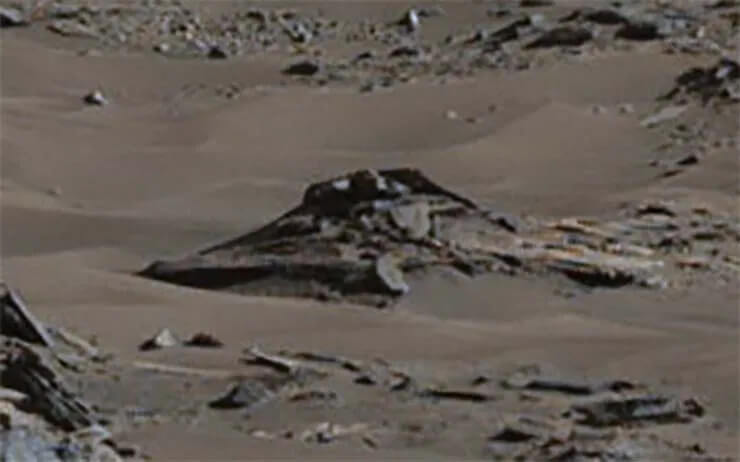 In debates about the existence of extraterrestrial life, no name has been as controversial as Bob Lazar. On May 24, 1989, in a live interview with investigative journalist George Knapp, Lazar took the first steps towards becoming one of the most influential and controversial figures on the UFO issue. Concealing his identity and using the pseudonym “Dennis,” Lazar said that deep inside an unconfirmed section of  Area 51  called “S4,” he had worked on an alien spacecraft recovered for the US government.

The American physicist also revealed that, while at Area 51, his job was to reverse engineer an alien material called “element 115” which he claimed was used to power a spacecraft. Lazar has repeatedly hinted that he managed to seize a fragment of element 115 from Area 51 and that it is of great interest to humanity. However, it appears that the alien ships described by Lazar have appeared on Mars.

Popular ufologist Scott C. Waring while reviewing NASA images for strange and unusual objects on the surface of Mars saw what appears to be a crashed flying saucer. In the image (PIA20332), you can see a peculiar circular shape partially buried by dust and protruding from the surface of the red planet. For Waring, the anomaly is clear evidence of the place where a UFO crashed, as well as being irrefutable proof that the ancient Martian civilization had spaceships.

Specifically, he notes that the strange object appears to consist of a thin disc rim that rises to a thicker interior area and an upper deviation that is not curved but formed with straight lines. Waring also suggests that the possible flying saucer bears an uncanny resemblance to the vehicle described by Bob Lazar and that he allegedly saw at Area 51, which may indicate that there may be some connection between its history and the ancient technologically advanced inhabitants of the red planet. .

The popular ufologist goes on to claim that you can even see windows on the Mars spacecraft , although it must be said that that observation, like Waring’s conclusion that the anomaly is a spacecraft, is open to one’s own interpretation.

“While searching through some NASA archives, I came across a photo of Mars with a crashed disk, “ Waring wrote on his UFO Sightings Daily blog.

“The disk is very similar to the ship that Bob Lazar worked on in Area S4. The ship I found has a thin disc rim that rises to a thicker interior area and an upper hump that is not curved but is made with straight lines. I can even see windows on the Mars ship that I found. This is inexplicable proof that the aliens on Mars had spaceships. “

That said, there are many Internet users who agree with the ufologist’s explanation, and they assure that not only did intelligent extraterrestrial life exist on Mars, but that it continues to be very present. And if that weren’t enough, NASA hides all this evidence . But conspiracy theorists aren’t the only ones to believe in the existence of extraterrestrial civilizations on Mars.

In 2014, American physicist John Brandenburg said that two ancient Martian civilizations were wiped out by other nuclear-armed aliens. Dr. Brandenburg found a “high concentration” of xenon-129 in the Martian atmosphere, the uranium and thorium on the surface are the remains of two unnatural nuclear explosions , most likely caused by extraterrestrial invaders.

However, skeptics have said that Waring did not discover a crashed flying saucer on the surface of Mars and, in fact, the ‘UFO’ is simply a product of pareidolia. NASA has used this argument to explain the countless anomalies that appear in its images of the red planet. As he explains, the brain is wired to see familiar patterns, such as faces, for example, when they are not actually there. This is the psychological phenomenon known as pareidolia .

“Pareidolia is the psychological phenomenon in which people see recognizable shapes in clouds, rock formations or objects or data not related in any other way,” explains NASA itself. “There are many examples of this phenomenon on Earth and in space.”

But this logical and rational explanation does not prevent more and more people from being convinced that the different space agencies hide the truth from us: that there are intelligent extraterrestrial civilizations, both on other planets and on ours.

What is your opinion on the strange formation? Feel free to share your theory.