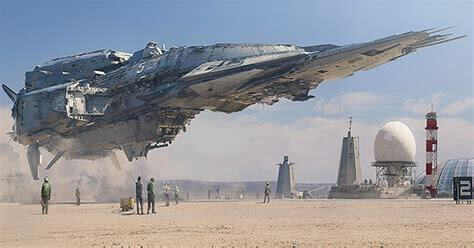 There have been numerous rumors according to which the American Navy would be preparing a special Space Fleet. Now, if we are to trust official reports, both NASA and the US Navy have a fully operational Space Fleet.

Their affirmations are supported by personalities of great reputations such as Daniel K. Inouye, who claimed that there is a secret government operating in the shadow with its own Air Force, its own Navy and its own mechanisms and ability to raise funds, and free to operate as it pleases.

Many conspirators and ufologists affirm that governments all around the world are in possession of secret and advanced technology, or in other words, alien technology.

Paul Hellyer, former minister of Canada once said that some decades ago, visitors from other planets came to Earth in order to help us evolve. Nevertheless, those visits were interpreted as a threat, and “our” people decided to shoot against them.

With the passing of time, thousands of billions have been spent on projects that both the Congress and the Commander in Chief have deliberately kept in secret.

However, Hellyer was not the only one to talk about extraterrestrial life, since many famous astronauts and former astronauts have done exactly the same thing, suggesting that there are multiple pieces of evidence that they are contacting us and that numerous alien civilizations have been watching us for a long time.

These react use unimaginable technologies such as magnetic rotation, toroids, or discs for their propulsion systems.