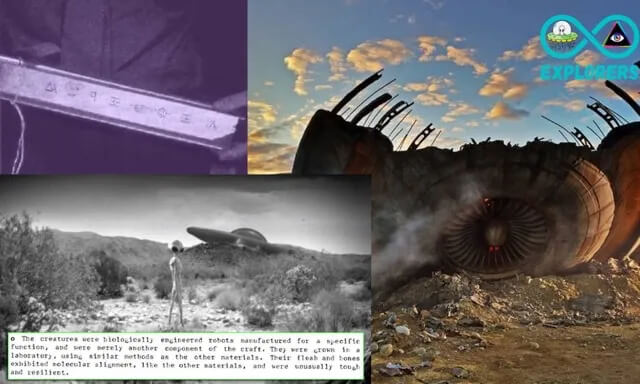 Nothing resembled the shape of a conventional airplane or rocket. There were chunky pieces of relatively intact metal frame and many smaller, thinner pieces of what looked like a fuselage. Everything was made of a strange metal alloy, what he called “unobtanium,” very light and strong. Some of the pieces could not be bent, while others were extremely flexible. There were also some pieces that appeared to be rusted on the outside or to have been subjected to very high heat.

There were no discernible welds or rivets anywhere in the wreckage, and my father said it looked as if the entire ship had somehow been cast in one piece. There were no motors or moving parts at all, no propellers, jets, or nozzles. There were no visible cables, switches, gauges, vacuum tubes, or electronics of any kind. There were what looked like long, small lights; solid pieces of plastic of what he called “spaghetti” that were not wires or tubes, with no apparent function. There were strange characters on some of the pieces, a type of writing my father had never seen before — although only on the inside of the ship; there were no marks on the outside.

There were also a bunch of loose objects with no apparent purpose. The strangest objects he said he found were metal reclining seats the size of a child, with notches for the head, body, arms and legs, including notches for hands with spaces for six fingers. There were no corpses in the rubble.

After examining the remains, my father reported to the general, “Kell, it is not one of ours, that’s for sure.” Asked whether he thought it was a rocket or a jet, he replied, “Neither.”

The general asked my father if he thought the Russians had done it, and my father replied, “No, unless those inscriptions inside are in Russian.”

The rumor around the place was that the ship was a crashed flying saucer, and everyone present instinctively felt that it was not from Earth.

My father said that he helped the crew pick up some of the remains, until more soldiers and some intelligence officers arrived and told them to leave. He said they returned to the local air base, and then the next day they flew the recovered wreckage back to Ft. Worth in two C-54s, again with combat escorts – but this time without the general’s company.

Three small bodies packed in ice were loaded aboard his plane. They told him that they were the crew of the crashed ship. The ice was melting and, according to my father, the bodies were decomposing and smelled bad. He was able to examine the bodies and obviously thought they were not from this planet. This is what he told me about what he observed:

Upon arrival in Ft. Worth, the remains and bodies were immediately loaded onto another transport under heavy surveillance and flown elsewhere. My father said he thought it was all sent to Washington, DC

Subsequently, a rumor was heard that a fourth body had been recovered separately later and shipped alone, with the rest of what was recovered.

My father said that he and the rest of the crew were immediately questioned by intelligence agents, who ordered them never to talk about what they had seen, forcing them to sign a confidentiality agreement that would be enforced under penalty of treason.

My father was a member of the 414 Fighter Group. He was very well connected within the AAF and the airline industry. His stepfather (Charles Eastman) was an officer in Kelly APB and helped him get started in the AAF with special privileges. My father’s dream was to be a fighter pilot, but still too young, he entered first as a mechanic and crew chief.

My father was very intelligent, had mechanical talent and was very interested in airplanes, especially jets. He was part of the P-80 Shooting Star program (the Army’s first operational jet fighter) and trained at the plants where they were designed and built, where he received low-level security clearances. He received special training in air bases and aircraft manufacturing throughout the country.

He was discharged from active duty in early 1947, but continued to train and serve in reserve status until he returned to active duty when the Korean War began. When he was discharged in 1947, he was recommended to continue military training, in which he participated frequently at various air bases and aircraft plants, including plants and bases in Ft. Worth. Shortly after leaving active duty, he began formal pilot training and attended the Schreiner Institute in Kerrville, Texas, where many WWII airmen and fighter pilots were trained. My father was very loyal and devoted himself to the Army Air Corps and later the United States Air Force.

My father kept an address book with the names, addresses, and phone numbers of all the airmen he met across the country and abroad, from World War II to Korea. He had regular contact with many of them throughout his life. He regularly attended Veterans Meetings, VFW, and spent a lot of time in VA hospitals. My father had many well-known engineers in the aeronautical plants in which he trained and maintained his contacts with them.

He had access to inside information on the government’s saucer recovery program. Because he was there from the beginning, because he knew many of the other men who participated. He said that these men were forbidden to speak to strangers about these matters, but that they could and continued to speak freely among themselves about it.

For years after recovery, my father continued to monitor and gather information on subsequent developments through his many contacts (some of whom became high-ranking officials and government agents). As one of the first at the scene of the saucer accident, others involved continually introduced him to new members of the team, even years later, and shared their experiences with each other. He explained to me that those involved formed a kind of fraternity around the recovery events they had experienced. It was an unsettling and unnerving experience, and the only ones they were able to talk to about it were themselves.

He made it clear to me that he was good friends with some men who were “high up” in the recovery program. Despite being ordered never to speak about his experience, he continued to ask questions at every opportunity.

The following is a synopsis of what my father told me that he was able to learn through his contacts over the years:

Because he was persistent, my father received a lot of information from various sources regarding the flying disc recovery and investigation. In our many conversations on these topics, my father emphasized to me that the secrets of the discs were feasible technologies that humans could and would one day master.

Witnessing the crashed saucer had a profound impact on my father for the rest of his life. Before the event, he was extremely interested in all types of aircraft, especially advanced propulsion systems, an interest that led to his early work on the first jets. Having seen what he saw, he gained a lifelong drive to understand how the crashed saucer worked and reproduce the technology. He became obsessed with the subject and dreamed of ways to reproduce its propulsion system. He stated that it was possible and that men he knew personally had already worked hard to achieve this goal.

At some point, my father acquired a set of classified documents related to a project code named RAMP . He said they came from one of his contacts in California. These documents describe the propulsion system of the recovered discs and the efforts made to duplicate it.

The documents contain the details of the “advanced form of telekinesis” generated by the creatures as propulsion and how it was believed to work. My father said that the information in these documents is the key to reproducing the propulsion technology of the ship.

When I was young, my father thought that jets were the way of the future, so he entered the P-80 Shooting Star program to study jet propulsion. However, he changed his mind when exposed to the incredibly advanced cymbal technology. My father held that saucer propulsion was the true way of the future.

He emphasized the fact that whoever is able to develop and commercialize this technology will become rich beyond belief. And he claimed that there were “limitless applications” for the technology in all segments of society.

Many times since 1973, I have urged my father to tell someone what he knew and to make the information public. He refused, saying that he had taken an oath and signed a document and that he could be jailed or even killed if he revealed something. He made me swear that I wouldn’t tell anyone either, and said he’d deny everything if I said a word about it. However, before he died, my father gave me the RAMP project documents and told me that “I would know what to do with them when the time came.”

Although the RAMP documents he left me appear to be genuine, I never had any evidence to support my father’s claims until after his death, when I found the records about his military service, indicating that he did in fact participate in and associate with the AAF. in various facilities from 1944 to 1952.

For many years I have kept my father’s secrets. He died unexpectedly a few years ago and since then I have wondered what to do with the information he left me. I think now is the time to reveal what I know and ask for help, the “right time” that my father referred to. He clearly believed that I should try to develop the technology and commercialize it, but I lack the resources to do so. However, I have studied it intensively and made some progress in my understanding of the technologies involved and how they can be applied.

I’m not looking for publicity or notoriety. What I want is someone to help me develop the technology my father left me. I am willing to share the information in the RAMP documents with you if you work with me in secret and help me figure out what to do with the information. If you are not interested in any way, please refer this project to a trusted colleague with the necessary qualifications. Please reply. I hope to get news from you.

So far the translation and transcription of the letter.

Unfortunately, we have not yet been able to come up with Stanton Friedman’s answer – if there was one – but the truth is that much of what was said in the text is consistent with what is maintained by other important witnesses to the Roswell incident. The most interesting thing that is revealed here is that these creatures were not fully biological, but rather robots or artificial intelligences ( a former Pentagon official claimed the same ) that were an integral part of the crashed ship and its propulsion system.