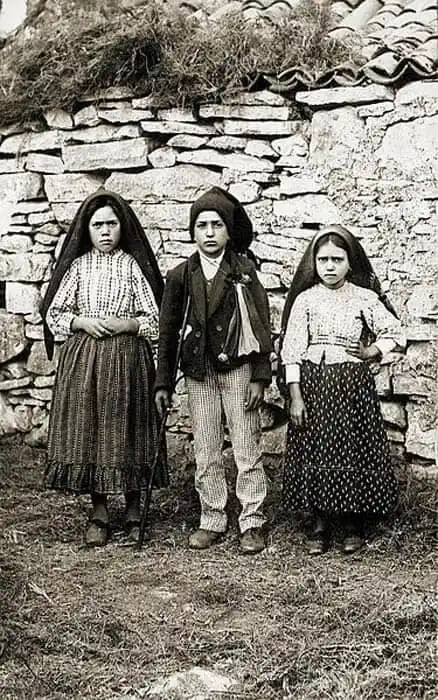 Popular characters described in ancient texts of various religions are known as Gods or Angels. Since ancient times, humans have been worshiping certain deities that are believed to have come from heaven. According to ancient astronaut theory, “Gods” and “heaven” could be a metaphor used by ancient human civilizations for “Aliens” and “Outer Space.” What if ancient gods were actually ancient aliens that had come to Earth from other planets? It can be true and there are classic examples of such incidents in human history. A century ago, some strange sky event, known as the “Miracle of the Sun” happened in Fátima, Portugal. This particular incident is one of the rarest mass UFO encounters in the history of the modern world.

In the early spring of 1916, three children, Lucia Santos (9) and her cousins, Jacinta (6) and Francisco Marto (7) were tending a flock of sheep outside the tiny village of Fatima, Portugal. They reportedly saw a strange figure that was later referred to as Virgin Mary. The children could only see and hear the “brightly glowing” apparition but did not talk. Santos wrote: “A lady dressed in white, shining brighter than the sun, giving out rays of clear and intense light.”

They were told by the visitor that a miracle would happen on October 13 in the following year, and she would visit them every month on the 13th. As the news spread, many people visited the children and the location where it all had happened.

In the beginning, the children tried to keep it a secret but later, Jacinta told about the visitor to her mother. This scared her mother and she took the girl to a local priest to recant but she did not. People wanted to wait for the children to have their following encounter and during the third visit, the children said that the apparition revealed to them three secrets about the future and asked not to disclose them until the right time. The situation in Fatima got more intense. Subsequently, a state bureaucrat took the children under their custody and took them to Vila Nova de Ourem to recant their stories. Again, they did not.

The number of people drastically increased as October 13 was coming closer. Finally, on the predefined date, over 80,000 people gathered in Cova da Iria to witness the miracle told by the apparition. The rain was pouring, and the crowd was standing in the mud, waiting for the signal from the children. As the apparition was only visible to children, they asked the people to look towards the Sun.

Thousands were about to witness the event that was later known as the “Miracle of the Sun.” The clouds parted and a bright disc-like object spun through the sky and swooped over the crowd below. The disc radiated colored lights and is said to have emitted heat before returning to the clouds. The strange phenomenon lasted for 10 minutes.

“Before the astonished eyes of the crowd, whose aspect was biblical as they stood bareheaded, eagerly searching the sky, the sun trembled, made sudden incredible movements outside all cosmic laws — the sun ‘danced’ according to the typical expression of the people,” as reported by a Lisbon newspaper. Many people claimed having seen the astonishing vision from 25 miles.

The heat emitted by the UFO was so intense that the clothing of spectators dried up. There are reports that say the figure encountered by children was not Virgin Mary but a 3.5-foot tall alien-humanoid called the “Little Woman.” The children never said that the apparition was from heaven. When they asked her from where she had come, she pointed toward the sky. The apparition never moved her mouth, Lucia could only hear her telepathically.

In the book “Heavenly Lights, The Apparitions of Fátima and the UFO Phenomenon” by Fina d’Armada and Joaquim Fernandes, it is described that what the children witnessed was a serious encounter with an alien being that carried a luminous ball at her waist. The book explained that the entity came down from the sky and then disappeared slowly.

The account of Dogon tribes shared similar information, and for them, the sky and everything connected with it is of great importance. The Dogon says that the sky was created by God Amma (also called Amen). He also created the first living beings on Earth. They are known as “Nommo.” These very first inhabitants of our planet were ethereal spirits. However, they are sometimes described as amphibians, hermaphrodites, fish-like creatures. They are often referred to as water masters, observers, and even teachers. The Dogon claim that the Amma created these creatures in the distant past.