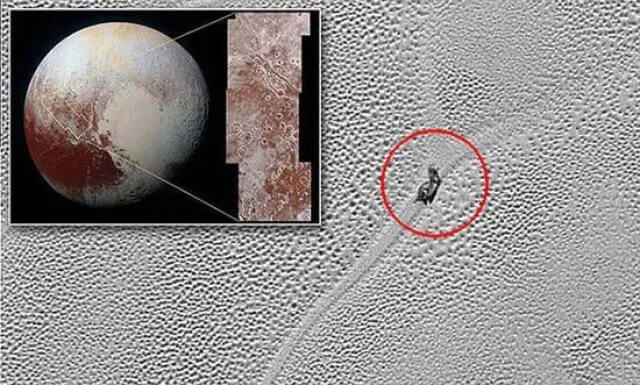 Pluto ceased to be considered a planet by the most prestigious international astronomers, to be coined as “planetoid” or “dwarf planet,” however, it is a mysterious body.(“Creature” Sliding on the Surface of Pluto)

Recently some photographs of its surface show something strange that the investigator David Parcerisa brings us in its last video programs.

The New Horizons spacecraft sent some high resolution images of the surface of Pluto. In one of the images you can see a strange object resembling a “snail” sliding across the surface of the frozen planet.

And as might be expected, the mysterious dark form that appears in the picture has caught the attention of conspiracy theorists and believers in the UFO issue in social networks, where they have ensured that it could be the definitive evidence of extraterrestrial life on Pluto . Some experts on the subject have gone further, by ensuring that it could be a natural species of giant snail gliding on the dwarf planet.(“Creature” Sliding on the Surface of Pluto)

However, because of the controversy generated by this image, NASA has issued an official statement explaining this new anomaly. According to the scientists of the American space agency, what the image shows probably is a dirty iceberg. What do you think?(“Creature” Sliding on the Surface of Pluto or iceberg?”)