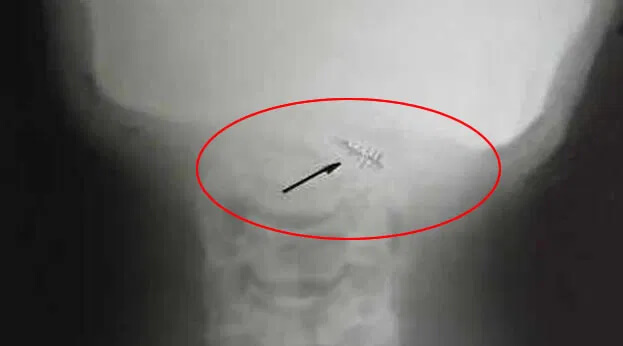 Implants, usually found in victims of alien abduction, have been reported In different body parts by the abductees and the origin of implants are unknown. In 1995, steps were taken to obtain and examine the implant, and this operation was at the expense of Dr. Roger Leir, who carried out the extraction.

Here are some of his final conclusions-:

The implants were curiously well tolerated by the body (without being rejected) because they consist of a layer that protects them from biological tissues. A strange set of nerve cells was found around these objects. They contain direct materials found frequently in meteorites. Further exams have confirmed that it is possible that the biological mucosa of the implant can be created with clean skin of the abductee.

If one speculates that they are of human origin then that would mean an advanced technology perfected and tried in total secrecy. The implant might have been created to observe and locate the abductees or control their thoughts and their organic functions. Dr. Leir California executed the extraction of eleven foreign objects. The implants were in the form of a T, triangle, carbon microspheres, alloys of metals and metalloids with isomeric composition, Al, Fe, Ca, Ba, especially with a very complicated nano-structure.(Alien implants)

They are found in deep tissue in neural-bonding n, whose appearance is deeply absurd. The object is accepted by the body, without any irritating response or inflammation. Dr. Roger Leir, MD, has been operating since 1995 to remove implants from their bodies.(Alien implants)

According to him, there is no doubt that the anomalous phenomenon is real, but this is not a scientific disquisition. The first time they revealed these implants was by chance when they caught the attention of doctors on x-rays. Extirpation aims to establish whether the object is organic human or from extraterrestrial origin. The finding of foreign bodies found in the abductees is a phenomenon that has not yet managed to have a scientific explanation in the field of health.(Alien implants)

The atomic structure, detailed in some cases has a heterogeneous nature “organic and inorganic” is not a natural event: aluminum, calcium, ruthenium, barium, europium, samarium, these are very strange to find on Earth. Implants are almost always inserted into different parts of the body, and usually the implant is between 1 and 10 mm in size.

Implants have a T-shape and are triangular or micro-beads, which are covered with a mucos  If the medicine were ever able to imitate this behavior, all the challenges regarding organ rejection in the transplants would be solved. Implants can be displaced with a simple pressure of a few centimeters, they contain magnetic properties within the patient’s body or show fluorescence under UV light. These implants seem to coexist with the nervous system of the abductees, some patients felt a great pain the extirpation.