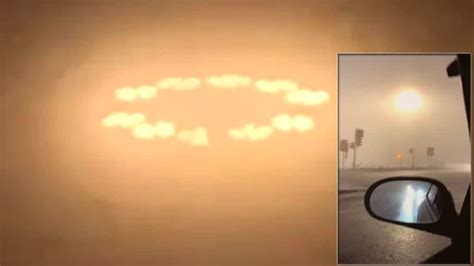 After finishing work at a little after 7 am, a local resident of Fargo, North Dakota, witnessed a strange, glowing ring of lights in the still dark sky as they drove home. Although there was a fog in the sky, the lights were clearly visible.

The witness, who sat waiting at the traffic lights, reached for his film and managed to capture several seconds of them. They would note that the lights appeared to be completely stationary and didn’t move at all during the incident. It appears, when the footage is viewed, that the lights are the underside of a solid object, most likely a circular, disc-shaped one.

One intriguing theory was put forward by veteran UFO researcher and writer, Scott C. Waring. He would state that it was possible the UFO had just landed and the “aliens disembarked to study” the area. If that was the case, then the witness might have been nearer to a much closer encounter than they previously thought.