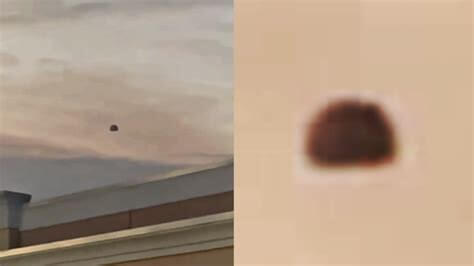 Early in the evening on the 3rd of January in Palm Beach, Florida at around 6 pm, a local resident was leaving a department store with their 10-year-old son when they noticed a “dark, cubed-shaped object” overhead. which was “moving slowly” through the cloudy sky.

The witness immediately reached for their phone, realizing they were witnessing something out of the ordinary, and began to film the aerial anomaly from the street below. They continued to view the object for some time. And while it appeared to be descending, they would eventually lose sight of it as it disappeared “behind the store” which blocked their view. The witness would estimate that it was around 500 feet away from where they stood. Although they would quickly get in their car and attempt to locate it once more, they could not find the object after that.

They would further recall how there was a “dim light” on one side of the object and that it appeared to be completely silent. What’s more, it appeared as though there was “some rotation motion” to the apparent craft.