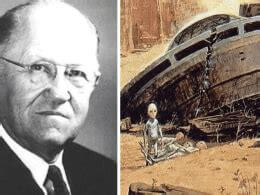 In April 1941, a local sheriff visited Reverend William Huffman, a pastor of the Red Star Baptist Church in Cape Girardeau, on the banks of the Mississippi, Missouri. The sheriff asked the pastor to hold a service for the victims of a plane crash that had allegedly happened on the same day near the city.

Huffman agreed and arrived at the crash site. The place was full of police officers, FBI agents, firefighters, military men, doctors, and there were debris of some kind of aircraft.

First of all, Huffman was surprised to see the wreckage of the plane because it was totally different from the usual airplane. He knew it from his experience of traveling in both military & passenger airplanes.

The object was metallic and shaped like a giant saucer. There were no seams or joints visible on it. Huffman tried looking inside the destroyed object through the huge hole that was at the outer surface of the object. He saw there a small metal chair, some instruments and consoles with dials, and also many other things that he had never seen before, which it would be very difficult for him to describe.

At some point, Huffman saw some strange inscriptions that resembled Egyptian hieroglyphs.

Huffman went to the three dead bodies lying on the ground near the object to give them last rites. When he saw the bodies closely, he was shocked because they were dead aliens the size of a small child.

He guessed that those aliens had probably been the pilots of the crashed object. He noticed that the two of the bodies were lying next to each other, but the third one was at some distance.

He thought that the third one had not died in the crash immediately and managed to go away some steps further from the spacecraft.

According to the pastor, the creatures had tiny mouths with indistinguishable noses and no ears at all. They were wearing tight suits that looked like chewed aluminum foil.

When Huffman finished his prayers, several military men approached him and told him to keep his mouth shut about that incident. Therefore, for all those years, he had not told anyone about it, but he shared everything with his wife and sons.

In 1984, Mrs. Huffman, dying of cancer, told her granddaughter Charlette Mann about everything. She also said that her husband somehow managed to secretly take a photo of one of the dead aliens from an unknown man.

According to Mann, at some point, she had also seen that photo but does not know why one day, it disappeared. She contacted ufologist Leonard Stringfield, who wrote about the incident in one of his books.

When Stringfield heard this story, he began to dig for other possible witnesses who may have still been alive. He found the sheriff of Cape Girardeau that served at the time of the incident, and he confessed to him that everything Huffman’s family said was true. He also managed to track down the alleged photograph, which Mann revealed.