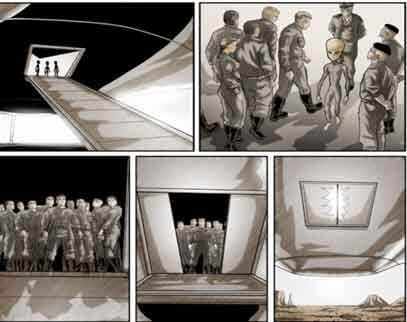 In 1983, a man named Richard C. Doty, who identified himself as a United States Air Force sergeant, claimed that he had provided records of the exchange program to journalist Linda Moulton for her HBO documentary “The ET Factor.” In 2005, a series of e-mails were sent to Victor Martinez, who ran a UFO discussion group. In the e-mails, it was stated that the project SERPO was real. The project SERPO is one of 20 top-secret projects supervised by the Majestic 12 (or MJ-12).

The official said that in 1965, an exchange program had been implemented with aliens, in which 12 people (10 men and two women) were selected for visiting their planet. They chose the best military specialists from the US Department of Defense, who had to spend 10 years on an alien planet.

SERPO was a joint program of the US government and humanoids living on the planet Serpo, located in the star system of the Zeta Reticuli. The distance from Earth to Serpo is about 39 light-years. According to an anonymous source, contact with aliens was established after two of their aircraft crashed in Roswell (New Mexico, USA) in 1947. Then, the Americans managed to save one humanoid. He was allowed to communicate with his brethren through an intercom located in a disc-shaped object.

The Americans prepared a group of 12 people after having established contact with the aliens. By agreement in the exchange program, for the duration of the stay of earthlings on the planet Serpo, one of the aliens remained as a diplomatic representative on Earth. All the information related to those who had agreed to fly was destroyed as if they never existed.

Over time, something went wrong. The Americans, who had left for Serpo in 1965, were able to return not 10 years later, as planned, but 13 years later, in August 1978. But that’s not all, one of them died of lung disease, another died as a result of an accident, and two expressed a desire to stay on Serpo forever. Only seven men and one woman came back.

The returning astronauts were immediately placed in a closed facility, where they spent about a year under the supervision of doctors and scientists, undergoing the examination and compiling travel reports. A year later, they received new documents, got paid significant sums of money and returned to normal life. None of them lived long. By 2002, all participants in the space travel to Serpo were dead. The cause of death could be a dose of radiation received during the flight, as well as on an alien planet.

According to reports, the living conditions on Serpo for earthlings were difficult and unusual. Acclimatization took years. Because the planet has two suns, the radiation background is too high for the inhabitants of the Earth. The age of the alien civilization living on the planet SERPO is 10,000 years, and only 650,000 aliens live on the planet.
The flight from the solar system to the Zeta Reticuli system took about nine months.

The fact that the planet that is part of the Zeta Reticuli system is inhabited by humanoids is confirmed by the stories of the spouses Barney and Betty Hill, abducted and returned to Earth. Besides, it is confirmed by the story of engineer Robert Lazar who worked in “Area 51”. Moreover, the Hill couple were able to remember what had happened to them only in a state of regressive hypnosis. Betty even managed to draw a star map, which had been shown to her by aliens. But Robert Lazar claimed that during his work in “Area 51,” he managed to see aliens from the planet Serpo and their aircraft several times.

According to one of the anonymous sources, the official space programs of earthlings are just a cover. Based on alien technology, a fleet of 8 mother ships and 43 defense-value spacecraft has long been created. And the colony on Mars was founded by the Americans together with the Soviet Union in 1964. The source claims that earthlings have already visited all the planets of the solar system, except Mercury.