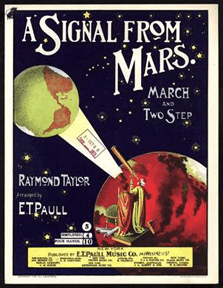 Messages to and from Outer Space

As the 20th century began, interest in the potential of life on Mars and the possible civilizations there lead to a search for signals. Could we communicate with another planet? How might we look for signals and messages from other worlds?

An 1896 newspaper article titled “A Signal from Mars” offered one example of how we might receive communications from the planet. In noting “a luminous projection on the southern edge of the planet”, the article suggests that this might be because “the inhabitants of Mars were flashing messages” to Earth. We can find this same idea in a piece of music. The 1901 piece, “A Signal From Mars, March and Two Step” offers music that Martians might be playing for us. From the cover illustration, it would appear that one rather civilized Martian is using a spotlight to communicate the tune while the other watches Earth with a telescope, likely waiting to see if we have the same taste in marches and two steps.  Soon, the development of radio technology would provide a much more powerful way to listen for and send messages to other worlds.

In the late 19th and early 20th centuries the idea and development of wireless telegraphy, sending and receiving electromagnetic waves through the air, offered new method of searching for communications from space. In 1901, engineer Nicola Tesla made the astonishing claim that he was receiving radio communications from Mars. His story was picked up and reported on broadly in the press.

An article from the Richmond Times offered an extensive description and commentary on his alleged discovery. “As he sat beside his instrument on the hillside in Colorado, in the deep silence of that austere, inspiring region, where you plant your feet in gold and your head brushes the constellations — as he sat there one evening, alone, his attention, exquisitely alive at that juncture, was arrested by a faint sound from the receiver — three fairy taps, one after the other, at a fixed interval. What man who has ever lived on this earth would not envy Tesla that moment!” While Tesla’s alleged communications with Mars captured media attention, it did not capture much serious interest from scientists.

As radio took off, so did stories of communicating with Mars. One such article from 1920, Hello, Earth! Hello! Marconi believes he is receiving signals from the planets provides extensive commentary on similar signals observed by the Italian engineer Guglielmo Marconi. Aside from describing this discovery, the article quotes Thomas Edison as saying Marconi’s work offers “good grounds for the theory that inhabitants of other planets are trying to signal to us.” As radio developed as a medium for communications in the early 20th century it was also positioned for listening for contact from other worlds. While it would quickly become clear that there weren’t signals from Mars, radio would play a critical role in the search for life on worlds outside our solar system.

In the 1930s and 40s radio became an invaluable instrument for observing the heavens. As astronomers began developing radio telescopes they made discoveries of various sources of electromagnetic waves in the heavens and these became useful sources of observational data about the space.

In the 1960s Frank Drake, Carl Sagan and a number of other scientists began searching for signals indicating the existence of intelligent life elsewhere in the universe. As it became increasingly clear that there was no intelligent life on other planets in the solar system, it became possible to detect signals from much further away. The Drake Equation was a way to estimate the number of civilizations out in the galaxy that could be sending out radio signals we could detect.

In general, Sagan and Drake were excited about the possibility of contacting intelligent life in the universe because of their own ideas about the progressive value of technology and science. Those civilizations, which possibly could have existed longer than ours, would have, in their minds, likely gotten past petty things like war, violence and conquest.

What do you say to a super intelligent alien race on behalf of all the inhabitants of Earth? Or at least, how would you sum up humanity to the universe just in case someone was listening?  This was the question posed to Carl Sagan and a team he assembled who developed the content for the Voyager record.

In a letter to Alan Lomax, Carl Sagan called the Voyager Record “a cosmic greeting card.” Both of the Voyager spacecraft, launched in 1977, carry copies of these records. Earlier, Sagan had been involved in crafting a message placed on Pioneer 10 and 11, the first NASA missions that would leave our solar system. The plans for messages to travel with the Voyager missions were set out on a much grander scale.

The records contain sounds and images selected to portray the diversity of life and culture on Earth. To illustrate the diversity of its image content it contains; an X-ray of a human hand, a street scene from Pakistan, an image of a violin next to a music score, images of the planets Mercury and Mars, diagrams of the structure of DNA, and the definitions of a range of units of measure. For audio recordings, each record contains greetings from earth in 55 languages and 90 minutes of music, including recordings as diverse as; “Johnny B. Goode,” written and performed by Chuck Berry, a selection from Stravinsky’s Rite of Spring, and ethnographic recordings of music from the Solomon Islands, Peru, China and India. After the launch of the Voyager probes, in a birthday message to Chuck Berry, Carl Sagan and Ann Druyan suggest that his music is now “quite literally out of this world.” As these images and recordings now leave our solar system they collectively represent the furthest reach of humanity into our universe.

In selecting audio recordings to include, Carl Sagan found a collaborator in folklorist Alan Lomax. In this letter to Lomax, Sagan describes the Voyager mission and explains that the record has “a probable lifetime of a billion years” noting that “it is unlikely that many other artifacts of humanity will survive for so prodigious a period of time; it is clear, for example, that most of the present continents will be ground down and dissipated by then.” In this respect, Sagan suggests, “Inclusion of the musical selections on the Voyager Record ensures for them a kind of immortality which could not be achieved in any other way.” It’s unlikely that the voyager records now at the edge of our solar system will ever be found by alien life forms. Just like the ideas about life on the moon, intelligent alien life, civilization on Mars and preoccupations with UFOs the Voyager records tells us a lot about how we see ourselves in a cosmic context. Reflecting on the ideas behind the record offers an opportunity to consider how we have presented ourselves on an artifact Sagan insisted would outlast nearly everything else humanity produces.

At the dawn of the 20th century, many looked to find signals from Mars in patterns in light. The advent of radio greatly expanded that search beyond our solar system. While scientists have yet to find signals from another world they haven’t stopped looking.  In fact we took it upon ourselves to reach out first and have tried to compose literally universal messages for the ages.