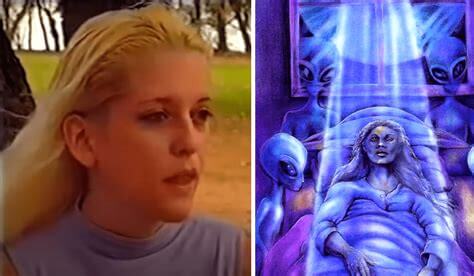 In 2001, a woman in her sleep beamed up through the window by the huge spaceship when her friend just walked inside the room to check on her in Queensland, Australia. This alien abduction case is considered to be one of the most arguable alien encounters in UFO history with proofs and facts.

On October 4, 2001, Keith Rylance (39) and his wife Amy (22) were spending a night with their business partner Petra Heller (35) at their property which was being developed as “Whispering Winds” winery in Gundiah, a town in Queensland, Australia.

At 9:30 pm, Keith went to sleep in the main bedroom, and Petra was staying up in her room in the annex. Meanwhile, Amy was in the lounged area on the couch, watching TV. That night, there was an intense storm. All the rooms were closely connected with windows and walls.

Because of the noise from the TV and storm, Amy fell asleep on the couch. At around 11:15 pm, Petra woke up, left her room, and entered the lounge where she witnessed the most frightening incident of the century.

She saw a rectangular beam of light, coming down from the open window of the lounge area where Amy was sleeping on the couch. Later, Petra claimed that Amy had been carried away by the beam through the window in her sleep. The beam was coming from the huge UFO hovering outside the house.

The incident was so terrifying that Petra apparently fainted for a short period of time. She screamed as soon as she got conscious and awoken Keith. He found Petra in deep shock and crying. The window was ruined.

To look for his wife, Keith stepped outside and began furiously searching for her but could not found her anywhere. He returned to Petra where she told everything she had seen, but Keith refused to believe her.

He again went out looking for Amy but when he could not see her anywhere until 11:40 pm, he called the Tiaro Police Department, and Constable Robert Marangna arrived with other police officiers at Rylange’s place at 1 am.

By the time police arrived, Keith had no choice to believe Petra as he could not find any other explanation and reasons to doubt her. Keith and Petra claimed that the spaceship had taken Amy away while she was asleep on the couch.

Three police officers conducted a search of the property and the nearby places. They took samples of torn window screens and noticed two flowering bushes, one of them exposed extreme heat.

While police were investigating the Rylance property, a phone rang. Keith picked up and heard a woman that was speaking from the town of Mackay, 500 miles from Gundiah. She said Amy was with her. She had found Amy at a petrol pump, totally confused and dehydrated.

The woman took Amy to Mackay Hospital and after finding her identity, she called Keith. As it was the missing person case, Keith then handed over the phone to Constable Marangna and now, the case was a joint Gundiah-Mackay affair.

While doctors were examining the medical health of Amy Rylance at the Mackay hospital, police asked her about her sudden disappearance. What she revealed was fascinating for the police to hear.

Amy recalled laying on the couch, watching TV, and suddenly, she found herself walking on a bench in a strange rectangular room. The room was brightly illuminated by many sources of light. Having found herself in an unusual place, she was in a panic, but the male voice from somewhere told her to remain calm as they would not do any harm to her.

After some time, a 6-foot tall man entered the room in a bodysuit that covered his whole body from head to toe. He was the same person who asked her to remain calm.

Amy felt that she had been in his captivity already for a while.
The next thing she remembered was that the man told her that she would be returned to a place not far from where they took her.

Then she found herself on the ground surrounded by trees. She woke up and got herself on the petrol pump from where a woman helped her and took her to the hospital.

She also gave a statement to the police officer that she had seen a huge UFO surrounded by small objects in her childhood when was in her 5th grade.

While Keith and Petra were driving their way to take Amy, the police booked a motel for Amy where she spent the rest of the evening. The next afternoon, Keith and Petra reached Amy.

They noticed strange triangular marks on Amy’s thighs and heels. Besides, her hair grew longer, and she had dyed them to blonde earlier, but now they became dark. Another interesting thing was that it looked like she had not shaved her legs for several days, although she used to regularly shave them.

The three of them remained in the motel and started searching for UFOs and alien abductions. They contacted Diane Harrison at the Australian UFO Research Network and told him about the whole incident. Harrison also involved UFO researcher Bill Chalker in the case.

In the midst of the research, Kate, Amy, and Petra disappeared. Fortunately, the ufologists still had Keith’s mobile number. He told them on a call that the three of them had to run away because they had faced a strange incident with Men in Black. He added that a dark brown truck had been chasing their car, apparently trying to push them off the road. Keith declined to disclose his new address.