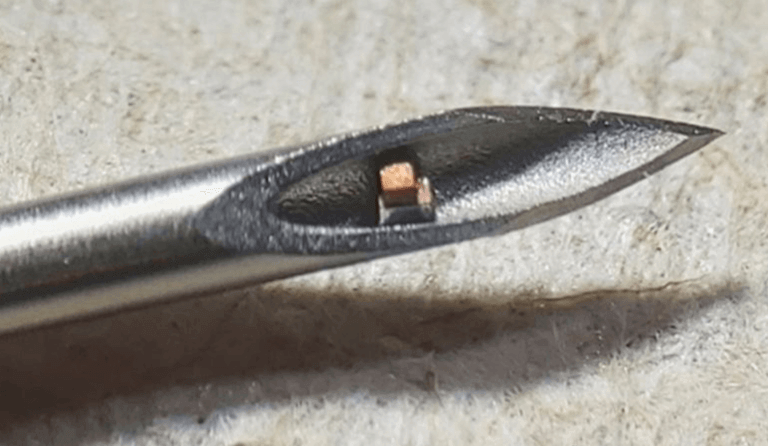 Smartwatches and other wearables are getting better and better when it comes to monitoring our vital signs and other biometrics. But what if, instead of strapping on a wearable, users were instead able to monitor their body processes by injecting a wireless, implantable chip to measure their health from the inside of their bodies? And what if said chip was almost unimaginably small, around the size of a dust mite and visible only when examined under a microscope?That’s what engineers at Columbia University School of Engineering and Applied Science have developed. Working with the world’s leading chip fabrication giant, they’ve created an ultrasound-powered, injectable, fully functioning single-chip system that’s so tiny it could one day enter the human body by way of a hypodermic needle. Once there, they believe it could then be utilized for in-body monitoring, ushering in an age of health tech that goes way beyond the current functionality offered by a health-tracking device like the Apple Watch.

“What is most exciting is the size of the chip,” Kenneth Shepard, a professor of biomedical engineering at Columbia, told Digital Trends. “It’s not only the size, but the fact that the chip is the entire electronic system. Normally chips are part of larger systems that include other components to make them function.”

A cell phone, for example, comprises plenty of chips, boards, packaging, antennas, and battery. The same is true for the majority of implanted electronics, whether they’re pacemakers or spinal cord simulators. While they’re small enough to fit into the human body, they nevertheless take up a lot of volume. A chip-as-system (CAS) device, on the other hand, manages to compress a single integrated circuit into a mind-mindbogglingly small form factor. It has no wires and can be integrated with whatever additional transducers are required (in this study, piezoelectric crystals).

Shepard said that, in his opinion, “CAS devices are the future of implantables for all kinds of applications.”

The next generation of health-tracking tech

The chips were created with the assistance of Taiwan Semiconductor Manufacturing Company, the same semiconductor giant that makes the chips for Apple’s A-series and M-series processors, along with plenty of others.

“These chips are created by beginning with a standard complementary metal-oxide-semiconductor foundry process, the same that is used for chips used for computers, cell phones, [and] automobiles,” said Shepard. “ We use TSMC for fab, which is the world’s largest semiconductor foundry. Once we get the chips back [to the lab], we have to do two things: We have to integrate the piezoelectric transducers needed to interface to ultrasound, and we need to cut and thin the chip itself down to the very small dimensions required here.”

Currently, he said, the chips can be used for sensing temperature. This work is initially being done as part of a larger effort looking at ways to monitor wound healing, although the potential applications go way beyond that. Shepard noted that, “lots of other things can be sensed here, and we are actively working on these. One of the most intriguing is specific recognition of biomarkers.” Some of the biomarkers they’re interested in gathering include blood pressure, glucose, and respiration, among others.

Ultimately, injectable chips such as this could play a valuable role in diagnosing and helping to treat specific ailments in patients. Once they have entered the body, the team’s ambition is to allow the chips to communicate information from the body by way of ultrasound. That means one of these chips could be injected into a specific part of the patient, and would then be able to provide real-time data about changes.

Things can get even tinier

For now, this remains a work in progress. The chips have yet to be injected into a human subject, and are currently more a proof of concept of just how small a chip it’s possible to make. As with any medical breakthrough, this will need to go through plenty of clinical trials before there’s any chance of it being made available on the market.

Don’t think that the team has reached the bottom end of the sizing spectrum in terms of how small its chips could get. As dazzling as this may be as a showcase of miniaturization in action, Shepard said that there’s plenty more to be done.

“Yes, we can,” he said, responding to the question of whether future chips can get tinier. “Stay tuned. I don’t want to say too much yet of other things we are working on, but smaller — in fact, much smaller — is definitely in the works.”

A paper describing the work, titled “Application of a sub–0.1-mm3 implantable mote for in vivo real-time wireless temperature sensing,” was recently published in the journal Science Advances.