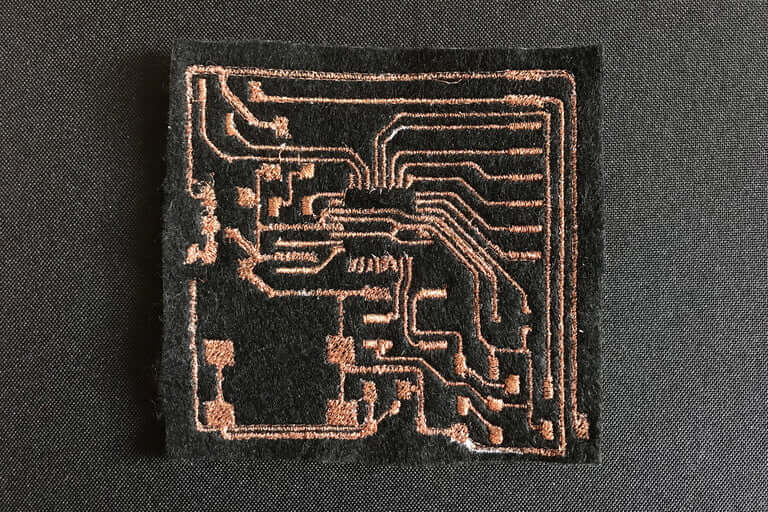 For a stretch of approximately a century and a half, from the middle of the 1800s to the end of the 1900s, the garment industry was New York’s largest manufacturing industry. New York made more clothes than anywhere else in the world, and more New Yorker’s worked in it than in any other profession.Jump forward to the present day, and 10 miles from the garment district, in an old Navy Yard building in Brooklyn — now outfitted as a trendy startup hub with potted plants, breakout rooms, and colorful loungers — a company called Nextiles is trying to turbocharge the next phase of innovation within fabric and sewing. And while clothes manufactured in the garment district promised to make their owners look smart, Nextiles is cutting out the middleman by using some impressive, cutting-edge tech that makes the clothes themselves smart.

“Our materials are fundamentally based on fabrics,” George Sun, Nextiles’ CEO and co-founder, told Digital Trends. “We still use polyester, we still use nylon, we can still use cotton and leather, but we make them conductive. When things are conductive, they obviously conduct electricity — and with electricity you’re in the dimension of electrical engineering and hardware, right? Once you have electrons moving around, and you’re in that space, you can capitalize on all these unique principles: Resistance, capacitance, inductors, transistors, and so on. What we tend to say is that we are creating a semiconductive material in fabric form.”

Nextiles was founded in 2018. Backed by the National Science Foundation (NSF), its patented — and, yes, machine-washable — smart fabric with advanced sensor technology is designed to capture biometric and biomechanical data streamed via Bluetooth in real time. The fabrics it makes are coated with conductive material like stainless steel that allows them to collect and transmit data.

Weaving these individual fibers into what Sun calls a “highway system of conductive threads” opens up new possibilities for granular data collection involving the human body. Right now, it’s being targeted at athletes, but one day, it could help make all of our clothes more intelligent. Ever wanted your spandex to talk back to you? It’s your lucky day.

Wearables is a broad category when it comes to computing. It refers to a piece of computer technology that is portable and carried with us wherever we might go, the flip side of the room-sized mainframe of yesteryear or the desktop computer. A smartphone might, in the loosest sense, be considered a wearable (especially when it’s strapped to a runner’s arm). Earbuds are certainly wearables or, as they’re sometimes called, “hearables.” A smartwatch is a wearable. So, possibly, are smart implants. Smart glasses count, too.

Wearables must be technology, affixed to the body, that nonetheless doesn’t continuously alert us to its presence as technology.

Each of these function differently and require, or will require, very different user interfaces and experiences to fulfill their true potential. What connects them — other than their smaller size — is how they fit into what user experience guru Don Norman would call human-centered technology. This is technology that fades, unobtrusively, into the background, gathering data and providing support without requiring us to explicitly focus on the technology itself.

Wearables must be technology, affixed to the body, that nonetheless doesn’t continuously alert us to its presence as technology. As Manfred Clynes and Nathan Kline, the two researchers who coined the term “cyborg” in 1960, described their concept of a human-machine hybrid, it is an “exogenously extended organizational complex functioning as an integrated homeostatic system unconsciously” (emphasis added).

The idea of smart materials began to gain momentum in the 1960s with everything from shape-memory materials and polymeric gels to photochromic lenses that cause glasses to darken in the sunlight. All of these involve materials that are able to sense environmental stimuli and adapt to them in some way, although they do not behave in an active manner to which we would ascribe genuine intelligence.

A different sort of wearable

However, it wasn’t until we neared the end of the 20th century that researchers started, in earnest, to investigate embedding electronics in fabrics and other items of clothing to give them next-gen sensing potential. Today, the wearables market of connected devices is comparatively mature. According to one recent report, the global shipment volume of smart wearables stood at 266.3 million units in 2020, approximately equivalent to the total population of Indonesia.

But Sun doesn’t like to compare smart clothing to existing wearables. “[People look at today’s smart watches and] they kind of have that frame of reference,” he said. “They’re always asking, like, ‘Oh, can it calculate my calories? Can it measure my sweat content?’ And the answer is that it can do a lot more than that. We’re trying to measure biomechanical motion; we can actually measure the angles, the torque, the strain.”

The notion of being able to capture every aspect of the human body in motion is a potentially transformative one. Consider sportswear that can tell you if you’re throwing a pitch correctly or lifting a weight properly, or a gym shirt that will let you know if it’s having to strain more at a certain point, indicating successful muscle growth. By dotting sensors up the back of a shirt like vertebrae, Sun said that it is possible to measure the curvature of a wearer’s spine. By positioning them on the chest, it could be possible to measure breathing. Such wearables promise to be game-changers when it comes to preventing injury and improving technique.

Sun became interested in the area of smart materials after working in an MIT research lab that partnered with the sportswear company Puma to make high-tech shoes. He said that he initially thought that this technology would be most useful for physical therapists (his sister is one), but quickly became convinced that this tech is most immediately suited for the athletics market.

Nextiles’ first products include an arm and knee sleeve that can be used to ascertain mechanical changes from different points on the body. Sun, appropriately enough, describes their rollout this summer as a “soft launch.” “We will be launching several of our beta products to some of these high-end athletes,” he said.

At present, he noted that there are just 10 of the company’s products “floating in the world right now” in alpha testing, but by later this year, he hopes this number will be in the thousands.

In the meantime, Nextiles continues its search for “new sensing modalities” including — but not limited to — EKG, EEG, and EMG. (That’s heart rate, brain activity, and muscle health.) In the long term, he considers the possibility for the kind of health-tracking biometric data that’s currently gathered using smartwatches and other devices, but expanded to cover the entire body. Beyond wellness, wearable smart fabrics could also be used to interact with the world around us, resulting in more seamless interactions with our environment.

Nextiles isn’t content to stay in the wearables space, either. It’s making smart fabrics and, while fabrics are synonymous with clothing, they’re not restricted to it. As Sun said, “Sewing is really everywhere. It’s in carpets, it’s in your vehicles, it’s in [airplanes]. Anywhere that needs a soft surface, you have fabrics.”

Imagine, he suggested, a bed sheet that gathers data on how you sleep or carpets that collect information on how the material morphs over time as people walk over it. Some of this could be about passive data collection that could allow manufacturers to gather information about real-world usage, the same way book publishers in the age of Kindle can see how an e-book is read (or not read) once the customer has purchased it. More intriguingly, it could be linked to some form of actuation, such as a bed that gets harder or softer based on your sleep patterns.

Nextiles isn’t the only entity working within smart wearables. Researchers working in universities have created intriguing prototypes, such as a fabric that could turn clothing into a wearable display and various efforts to make heating and cooling materials that could ensure individuals are kept at optimal temperatures wherever they go. Then there are startups like the Montreal-based Hexoskin, which has developed sensor-laden smart clothing for gathering “continuous cardiac, pulmonary, activity, and sleep data,” and Catapult, which makes a beeper-sized device worn by some NBA teams to measure movement and physical exertion.

Tech giants like Apple have patents in this area, although they have yet to actually announce or ship anything. The big whale in this ocean would appear to be Google, which announced its Project Jacquard initiative at its 2015 Google I/O conference. Named after the innovative punch card-controlled Jacquard loom from 1801, Project Jacquard is headed by the search giant’s Advanced Technology and Projects group and dedicated to developing touch-sensitive fabric.

An associated deal with Levi Strauss & Co. resulted in a smart jacket that was long on sci-fi promise but short on immediate utility. Other Project Jacquard creations (A backpack! A shoe sensor!) have also been released, although none so far have taken off in a big way.

What Google’s work in this domain highlights is how it’s still early days for smart clothing. Project Jacquard aims for low-hanging fruit: “Skip a song by swiping your sleeve,” it notes on its website. “Take a picture by tapping on a shoulder strap. Get reminded about the phone you left behind with a blink of light or a haptic buzz on your cuff.” These are fun gimmicks but certainly not transformative. They are, as the saying goes, evolutionary rather than revolutionary.

The start of a long journey

The question is whether Nextiles will be able to not just survive but thrive in the face of a growing interest in this area. As exciting a path as this undoubtedly is, it also feels like it’s the start of a long journey.

“We have enough firepower to get us going for the next year, and we were constantly growing the team,” Sun said. “We actually already have paying clients that we are generating revenue. That’s sustaining most of our R&D actually. Also, we’re applying for grants. We know there is application potential in health and medicine, so things like the [National Science Foundation] or similar agencies, we’re applying for grants from as well. There’s a lot of avenues where we are either receiving money or making money.”

Focusing on the athletic market to begin with is a shrewd move. Not only do high-performance athletes have more use for the data, and will presumably spend more to get it, but there are also few better ways of selling a new product to the public than having it worn by top figures in the world of sports.

If Nextiles can pull off its ambitions, it may just have the makings of a very promising business on its hands. And who knows? In doing so, it could forever banish our image of Star Trek-style onesies or nightmarish Darth Vader and RoboCop-style suits of armor as the ultimate in science fiction clothing.