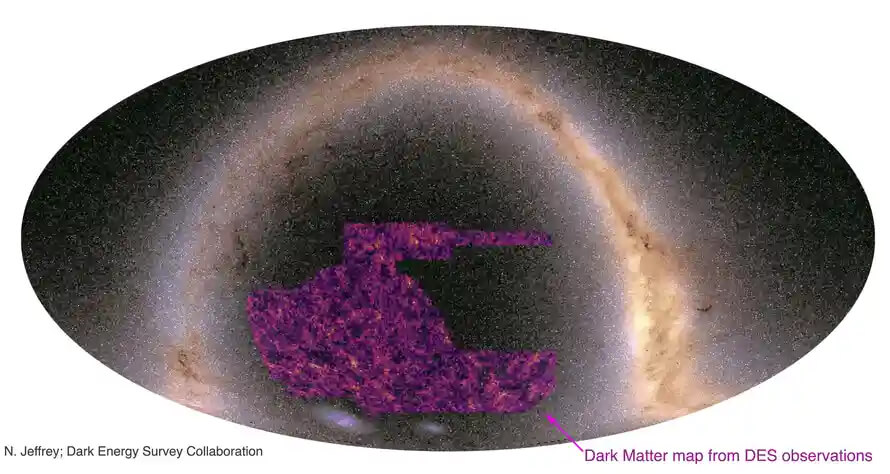 We can’t see it, hardly understand it, but know that it exists because of the powerful impact it applies on space.

Dark matter makes up about 27% of the Universe, and its gravitational force is enough to fit entire galaxies together in a structure known as the cosmic web. Now, scientists have created the largest ever map of this perplexing substance – and it could hint that there’s something wrong with Einstein’s theory of relativity.

They have also mapped the location of big cosmic voids where the conventional laws of physics may not apply.

Astronomers are able to map the existence of dark matter by looking at light traveling to Earth from distant galaxies; if the light has been distorted, this means there is matter in the foreground, bending the light as it comes towards us. Using artificial intelligence methods to analyze images of 100m galaxies, members of the International Dark Energy Survey (DES) team – a collaborative effort to reveal the nature of the perplexing dark energy that is driving the expansion of our Universe – have created a map that covers a quarter of the sky of the southern hemisphere (an eighth of the total night sky visible from Earth).

Visualized as a pink, purple and black-mottled patch, clustered inside a pale ring (a superimposed image of the Milky Way), the brightest areas of the map show the densest areas of dark matter, corresponding to super clusters of galaxies, while the black patches are cosmic voids (see main image). 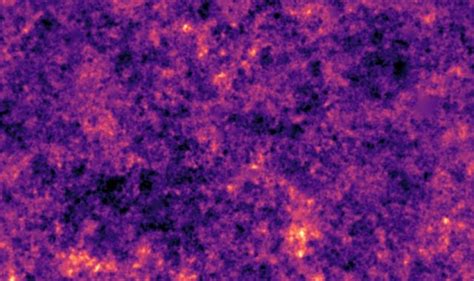 Dark matter makes up about 27% of the universe

Dr Niall Jeffrey, of University College London and École Normale Supérieure, Paris, who co-led the project, said: “It shows us new parts of the universe that we’ve never seen before. We can really see this cosmic web structure, including these enormous structures called cosmic voids, which are very low-density regions of the universe where there are very few galaxies and less matter.”

Scientists are interested in these structures because they suspect that gravity may behave very differently inside them. By identifying their shapes and locations, the map could therefore provide a starting point for further study.

The map, which will be published in the Monthly Notices of the Royal Astronomical Society, also brings us closer to understanding what the Universe is made of and how it has evolved.

According to the standard model of cosmology, the Universe started with the big bang, and then it expanded and matter evolved according to Einstein’s theory of general relativity, which describes gravity. These gravitational forces are what created the clumps and voids of matter, which constitute the cosmic web.

Although calculations by the DES team suggest that the distribution of this matter is broadly consistent with predictions in the standard model, it is not a perfect fit. “If you look out into the universe, the matter isn’t as clumpy as expected – there are hints that it is smoother,” said Jeffrey.

“It may seem a relatively small thing, but if these hints are true then it may mean there’s something wrong with Einstein’s theory of general relativity, one of the great pillars of physics.”

One possibility is that some of the measurements used to calculate how the universe should look are not quite right, said co-author Prof Ofer Lahav, also at UCL and chair of the DES UK consortium said. Alternatively, it may be a problem with the underlying model. “Some people would even push it to say maybe Einstein was wrong,” he said.

Lahav isn’t prepared to go that far himself, yet: “What I say is: ‘Look, don’t be too relaxed. There’s something there which might indicate a disparity. Work hard, try to understand it by conventional means, but keep your eyes open that it could lead to a revolution in physics.’ ”