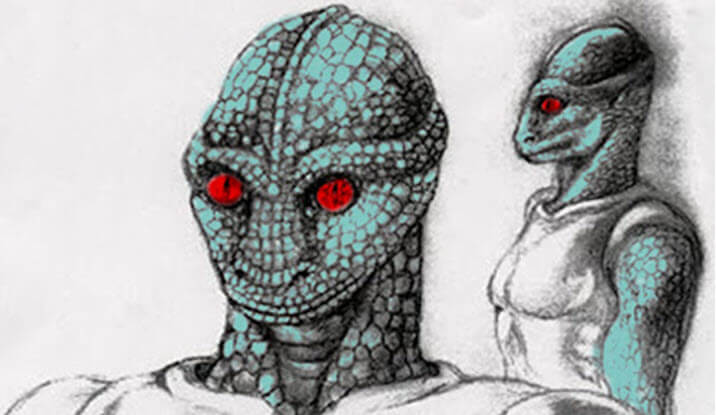 On the 31st of August 1968 three hunters had an experience of a lifetime. They encountered a reptilian humanoid and his spacecraft. The encounter took place at around 4 pm near Valencia Spain, at the mountain range of La Yesa.

The three hunters, all around the age of 50 had stopped to prepare lunch near a gorge. While preparing food they noticed some kind of flash in the sky. They did not think much of it. They were very down to earth and had no interest or knowledge of UFOs or aliens.

Few minutes later, one of the group, Mateo Chover walked towards the edge of the gorge to urinate. He left his gun and belt on the ground and stood at the edge. Mateo looked at the other side of the gorge and at about a distance of 100 meters saw what could be described as a humanoid being. The humanoid had grey skin, was muscular and well-built, had a reptilian head; two red eyes and claw-like hands. On one of his claws he held a transparent helmet featuring a white visor. Also Mateo noticed that the humanoid had a cat-like tail that touched the ground.

The being wore a white overall and white boots. On his back he carried a metallic box measuring half a meter and featuring a black antenna on top. The being stood under a tree and gave the impression (according to the witness) that he was waiting for someone. Also, although the witness cannot be 100% sure due to the distance the being seemed to have a forked tongue that it would stick out once in a while.

Mateo kept looking while hiding between some rosemary bushes. He signaled to his friends to come close to him in silence. Accustomed to walking in silence so as not to scare off animals his friends approached him. Amazed by what they saw the three friends observed the being together for about 3 minutes. Suddenly, at a height of about 10 meters above the tree under which the being hovered a black metallic cylindrical object. The object was on a horizontal position and completely silent static. It measured about 30 meters in width and 10 meters in diameter.

At this moment they were completely terrified. Was this species invading Spain? They fell on the floor and crawled away to try and hide better between the bushes. After two minutes they heard a loud and short sound similar to that of machinery. Once again a flash appeared in the sky. When they were sure that the humanoid and UFO where gone they felt more comfortable and started to investigate the area.

They crossed the gorge and reached the tree under which the humanoid stood a few minutes before. The tree´s branches and some of its leaves appeared burned or charred. The area smelled of sulfur. On the soft ground they found several large footprints (size 50 / 16 in the US) of a smooth sole. Also they estimated that the being had to weigh about 150 kilos and probably stood at a height of 2.2 meters (they noticed that the beings head almost touched the lower branches of the tree). They finished their investigation by approaching a cave thinking that maybe the being had come from there. At the scene they realized that it was impossible due to the thick brush that covered the entrance.

In a state of disbelief and shock the waked back to their motorcycles. On the way they met two policemen. They explained their experience. The policemen did not take note and after listening to their testimony just said. ” In the lands this is normal; other people have seen them”