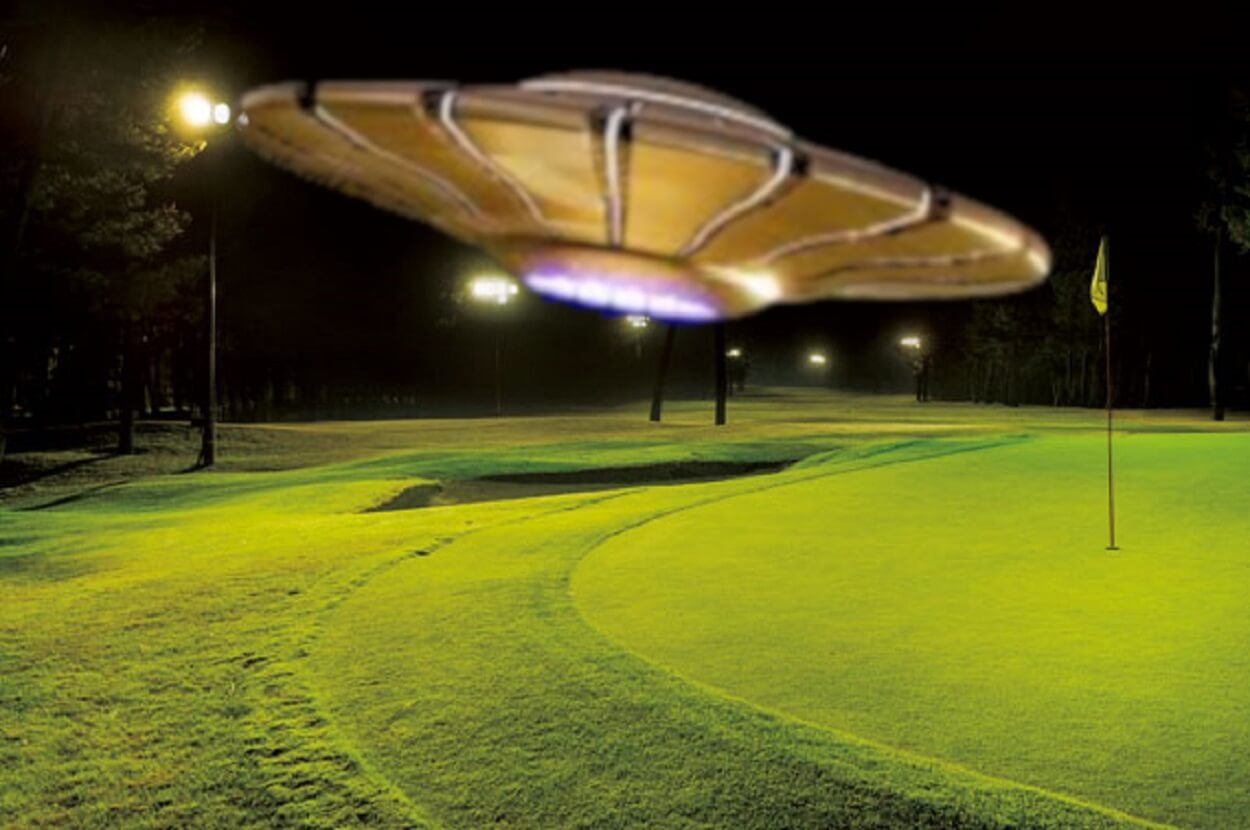 Many people in the UFO community refer to this apparent race of extraterrestrials as The Nordics. In a similar way that many dismiss claims of “reptilian aliens”, claims of this pale-skinned long-haired alien race are often met with similar disdain. It is easy, on the surface, to see why, and tempting to do likewise. However, the abundance of similar claims forces us to at least contemplate the reality of such an alien race.

Perhaps even more intriguing, certainly to the above accounts, is that August 1976 has several very similar encounters to boast of. Incidents where disc-like crafts would land and similarly dressed occupants would perform some quick surveillance type duty before quickly disappearing again.

For example, in Flint in Wales, an unidentified craft was observed in a field in the middle of the afternoon. Furthermore, there were reports of several “occupants”. An almost identical sighting, again in the middle of the afternoon, occurred in Stockport towards the end of the month. A sighting in St. Raphael in France one evening just after midnight saw a “cigar-shaped” object hovering over a field with several humanoid figures clearly visible and moving around inside. According to the report, upon the blasting of a car horn, the object shot upwards and disappeared.

Over in the United States, in Sterling, Colorado, in the middle of a series of cattle mutilation cases, no less, came a report of “three human-like figures” witnessed floating over a fence around a field housing the farmer’s cattle. When the two ranchers went over to the muddy field, there were no footprints whatsoever, suggesting, as in other cases, the entities were floating above the ground’s surface.

Perhaps one of the first of the August 1976 encounters also took place in the United States, this time in Wisconsin. 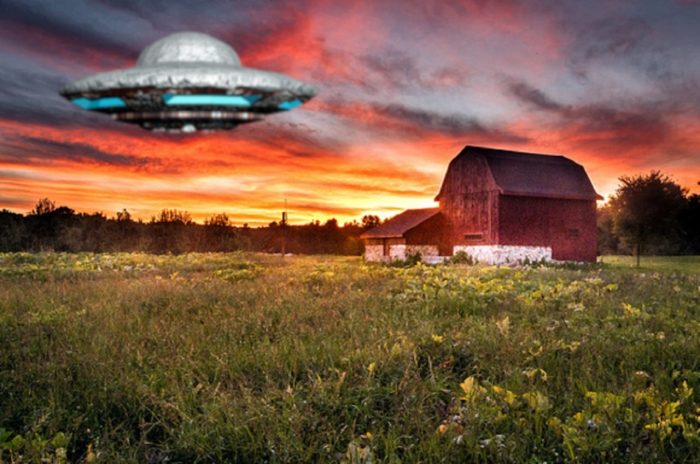 There were many sightings of “Nordic Aliens” in 1976

In Milwaukee, Wisconsin, in the early hours of 1st August 1976 at just after 4:30 am, came another intriguing incident. The unnamed 20-year-old female witness heard a noise outside that dragged her from sleep. When she peered out of the window, she was shocked to see two “humanoid occupants” near a strange “glowing light”. She could hear them talking, although the language was “unintelligible” to her and not one she could even hazard a guess at. The figures were a person’s average height and were apparently collecting something from the ground. Suddenly, they both disappeared and the light, likely the craft, disappeared into the night sky.

Perhaps one of the strangest of these incidents comes from Santo Domingo in the Dominican Republic. On the afternoon of the 15th August 1976, an “elderly gentleman” watched in bemusement as a shining circular object appeared out of the sky and began to descend into his yard right in the front of his house. Then, a humanoid figure emerged from the craft and quickly scanned their surroundings. Rather than take any further action, though, the figure promptly re-entered the craft which then took off at breathtaking speed. The entire episode had played out in absolute silence despite the obvious highly advanced nature of the craft. Was this a case of a landing in the wrong destination?

A similar incident would take place less than twenty-four hours later. And interestingly enough, the location was, once again, Wisconsin. The same state of the “humanoid sightings” only a fortnight earlier.

Perhaps of these other incidents of humanoid sightings in the summer of 1976 are those at Egg Harbor in Wisconsin on the 16th and 23rd August respectively. The first incident occurred around 4 am on the 16th August. The witnesses, Dean Anderson and Wayne Schutte, were tending to a local golf course ready for the busy day ahead. However, out of nowhere, an “orange object” descended on to the golf course. Anderson, who was on one of the golf course’s mobile mowers at the time, saw a strange figure standing on the course in the headlights of the mower. It turned and began running which prompted Anderson to give chase on the mower.

As he did so, he noticed a strange light appear on the creature’s helmet. At the same time, the creature’s belt also began to glow, colors of red, green, pink, yellow, and orange. He would get to within several feet of the strange humanoid before an “energy beam” appeared out of nowhere, instantly causing the mower to stop. Several seconds later, a “scout ship” descended, an open doorway on the underside declaring a bright glow inside. Suddenly, the figure began to float upwards into the doorway which closed as soon as its cargo was safely inside. The craft then ascended quickly and disappeared. 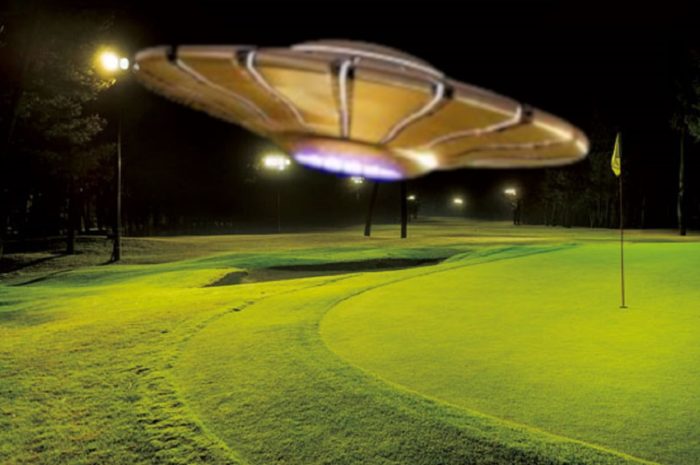 What was witnessed in Egg Harbor in 1976?

A Cosmic Scientific Mission On Earth In 1976?

At a little after 4:15 am on the 23rd August, the strange orange “glow” would descend again, almost in the exact same place. Once landed, two “human-looking occupants” came out of the craft. They would “float” down to the ground on a “band of light” before gathering several “samples”. They then approached Anderson and introduced themselves as “scientists” from Jupiter and Saturn. This detail, particularly in retrospect, leads many to question the authenticity of the account, certainly the second one, of which he was the only witness. However, it is perhaps worth noting that many scientists today point to the moons of both of these gas giants as likely candidates of supporting, and perhaps already hosting life.

Upon closer inspection, Anderson could see each of the humanoids wore sparkling tight-fitting suits of “some glistening metallic material”. He further claimed that these apparent cosmic entities had different colored skin. One a “light tan” and the other a “copper color” and were of the standard size of a human adult. The previous week, incidentally, Anderson would state the height of the entity to be around seven feet. Was this landing of a different race of alien? Or, and perhaps more likely, was the first incident in the early hours of the 16th August genuine? Whereas the second was one of fantasy on the part of the witness? Perhaps wishing to prolong the attention, or even seeking monetary gain? All speculation, no doubt, but several other similar close encounters, at least according to some, took similar turns.

All are compelling cases, though. And maybe there was a cosmic scientific mission on Earth by non-aggressive extraterrestrials during the summer of 1976?