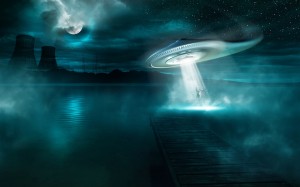 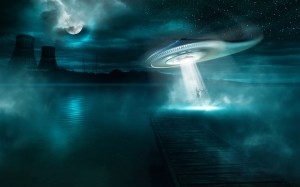 In 1988, Gulf Breeze, Florida became the epicenter of a string of UFO sightings and photographs mostly centering around one Ed Walters. With their unusually non-aerodynamic structure, color scheme, and general shape, the UFOs Walters (and allegedly other people) photographed looked less like interstellar craft of galactic villains and more like they should be on tilt-a-whirls—which is very fitting for the odd experience he described.

Starting on November 11, 1987 and ending May 1, 1988, the Walters family claimed to have 20 encounters with aliens that were flying around in an estimated 20 ships, with him seeing at most six crew members to a ship. This was exhaustively described in his book The Gulf Breeze Sightings. Walters’s book also has the odd photo of himself and his family members. One photo has him standing in a towel on the deck allegedly yelling, “Land, or get the hell away!” at a UFO. Another has a blue beam that the aliens purportedly used as a tractor beam of sorts being dodged by his terrified wife. From first photographing a UFO to the end, he experienced such weird telepathic signals as a woman speaking Spanish to a baby, a series of images of dogs, and (some days later) a bunch of images of naked women (“if this was to try to persuade me to board the ship, it wasn’t working”). At one point, they dumped liquid onto his home, some of which landed in a pool. It turned out to be salt water.

Additionally, aliens showed themselves to him repeatedly, both while he was driving at night and outside the sliding glass back door. The road encounter was where he came up with the assumption there were six to a ship: Five disembarked the ship, and he assumed one stayed aboard while it hovered. They were 1.2 meters (four feet) tall and though their faces looked like those of stereotypical aliens with black eyes and almost no features, they were only visible through slits in helmets because the aliens were supposedly dressed in blocky, bulky armor, of a type almost never reported since.