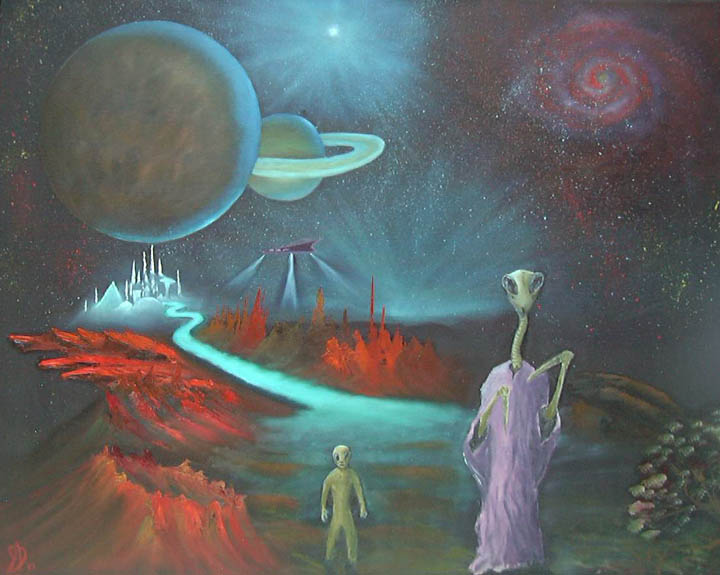 Study estimates the odds of life and intelligence emerging beyond our planet.

Humans have been wondering whether we are alone in the universe since antiquity.

We know from the geological record that life started relatively quickly, as soon our planet’s environment was stable enough to support it. We also know that the first multicellular organism, which eventually produced today’s technological civilization, took far longer to evolve, approximately 4 billion years.

But despite knowing when life first appeared on Earth, scientists still do not understand how life occurred, which has important implications for the likelihood of finding life elsewhere in the universe.

In a new paper published in the Proceeding of the National Academy of Sciences today (will change to May 19 tomorrow), David Kipping, an assistant professor in Columbia’s Department of Astronomy, shows how an analysis using a statistical technique called Bayesian inference could shed light on how complex extraterrestrial life might evolve in alien worlds.

“The rapid emergence of life and the late evolution of humanity, in the context of the timeline of evolution, is certainly suggestive,” Kipping said. “But in this study, it’s possible to quantify what the facts tell us.”

To conduct his analysis, Kipping used the chronology of the earliest evidence for the life and the evolution of humanity. He asked how often we would expect life and intelligence to re-emerge if Earth’s history were to repeat, re-running the clock over and over again.

This method of Bayesian statistical inference—used to update the probability for a hypothesis as evidence or information becomes available—state prior beliefs about the system being modeled, which are then combined with data to cast probabilities of outcomes.

“The technique is akin to betting odds,” Kipping said. “It encourages the repeated testing of new evidence against your position, in essence, a positive feedback loop of refining your estimates of the likelihood of an event.”

From these four hypotheses, Kipping used Bayesian mathematical formulas to weigh the models against one another. “In Bayesian inference, prior probability distributions always need to be selected,” Kipping said. “But a key result here is that when one compares the rare-life versus common-life scenarios, the common-life scenario is always at least nine times more likely than the rare one.”

The analysis is based on evidence that life emerged within 300 million years of the formation of the Earth’s oceans, as found in carbon-13-depleted zircon deposits, a very fast start in the context of Earth’s lifetime. Kipping emphasizes that the ratio is at least 9:1 or higher, depending on the true value of how often intelligence develops.

Kipping concludes that if planets with similar conditions and evolutionary timelines to Earth are common, then the analysis suggests that life should have little problem spontaneously emerging on other planets. And what are the odds that these extraterrestrial lives could be complex, differentiated, and intelligent? Here, Kipping’s inquiry is less assured, finding just 3:2 odds in favor of intellectual life.

This result stems from humanity’s relatively late appearance in Earth’s habitable window, suggesting that its development was neither an easy nor an ensured process. “If we played Earth’s history again, the emergence of intelligence is somewhat unlikely,” he said.

Kipping points out that the odds in the study aren’t overwhelming, being quite close to 50:50, and the findings should be treated as no more than a gentle nudge toward a hypothesis.

“The analysis can’t provide certainties or guarantees, only statistical probabilities based on what happened here on Earth,” Kipping said. “Yet encouragingly, the case for a universe teeming with life emerges as the popular bet. The search for intelligent life in worlds beyond Earth should be by no means discouraged.”