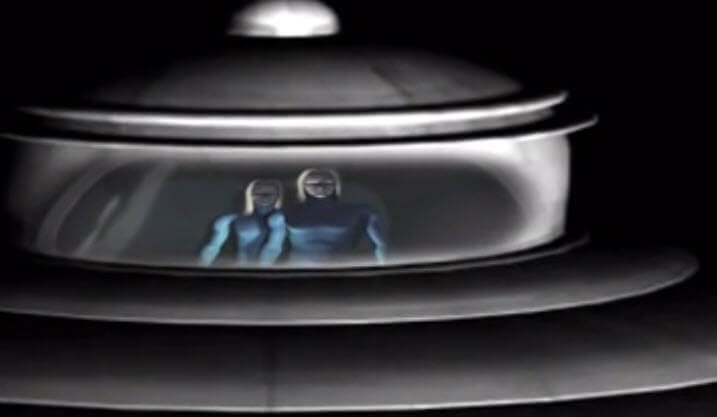 1954 was a year of intense UFO activity in the UK. One of the most reliable cases is that of Jessie Roestenberg. The incident took place in Ranton-Staffordshire on October 21st of that year, in the afternoon. Jessie did not have to travel far to have this experience; It all happened in her garden.

That day Jessie was inside her home in the countryside getting changed. A loud noise similar to that of pouring water on a fire disrupted the silence. Her first thought was that her two sons playing outside were in danger; maybe a plane was about to crash. She ran outside and saw her two sons lying flat on the ground in front of the house looking up to the sky; they shouted “Mummy, mummy there´s a flying saucer!!”. She did not believe them and told them to not be stupid and come into house. At that moment something drew her towards the side of the house; Jessie looked up and saw a flying disc something she described as a “huge Mexican hat”; it was stationary and had a bright silver color; it was hovering just a few meters above a farmhouse across the road. The object was about 15 meters away from her.

The object was slightly tilted and from it´s dome Jessie could see the craft´s occupants. She distinguished two human beings, a man and a woman of attractive appearance, she could see them from the waist upwards. They had long golden hair and were a tight light-blue turtle neck top (Jessie described it as a ski suit). Their forehead was a bit larger than usual. She just looked at them and felt that their eyes indicated a good nature and compassion; she was completely absorbed in the moment. Looking momentarily to one side Jessie realized that her two sons were also witnessing this extraordinary scene. When looking up again the UFO was nowhere to be seen.

Looking at the sky Jessie asked “Can you see anything ?” Jessie. Her sons pointed at a faint dot in the sky. It made three circles and then shot off and disappeared. Paralyzed with fear she stood outside the house for some time. That evening when her husband came home she found Jessie and the children under the kitchen table.

On the days that followed Jessie tried to analyze her experience. One thing was certain it was not as a hallucination as her two boys had also had the experience. She stuck to her story despite being ridiculed and with time realized that there was nothing to be scared of.