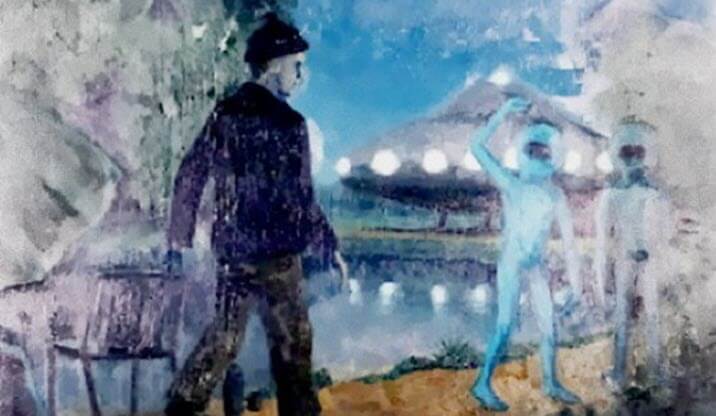 Alien encounter testimonies come in all forms and shapes and sometimes can be funny. Sometimes they include some humorous aspect. Aliens can also make mistakes. Alfred Burtoo, was taken aboard a craft but was asked to leave after the humanoids realized that he was an an old man.

In the early hours of August 12th 1983 (about 1 am) , Alfred Burtoo aged 77 settled at t his favorite fishing spot along the Basingstoke Canal near North Town, Aldershot (UK). With him he had his dog who was tied to his fishing umbrella. He started fishing and at the same time sipping some tea from his thermos. At around 1:15 am he saw a light descending and finally landing behind some bushes and trees at a distance of 80 to 100 meters. He could hear a noise that resembled an electric generator. Alfred thought that it could be some kind of craft coming from the nearby military base but the object did not move like something familiar.

Alfred kept an eye on the light between the trees. The dog started to growl and Alfred ordered it to stop. Then he began to make out two short humanoid forms heading his way. Being an ex military person he kept calm despite the unusual sight before him. The two humanoids stopped at a distance of less than two meters from him. They measured about 1 meter and 20 centimeters, wearing a pale-green, tight-fitting one piece suit from head to toe. The head was covered by a helmet of the same color and a black visor over the eyes. All facial characteristics were covered.

One of the humanoids signaled to Alfred to follow him and started walking back towards the lights. Alfred felt he had nothing to lose and started to follow the humanoid towards the lights while the second humanoid walked behind him. While walking they reached some railings and Alfred assumed that they would have to climb over them. But the being in front just walked through them as a ghost. After crossing a public road and continuing by the path next to the canal they reached the illuminated craft. The craft had a metallic surface (aluminum-like) and measured approximately 12 meters wide and 5.5 meters in height. It stood on two supports that had a ski-like ending. On one side he noticed a porthole and some stairs leading into the craft. Once more the humanoid leading the way signaled at Alfred to follow him; this time up the stairs and into the craft.

Alfred was amazed by the interior. The light was dim and the  room was literally curved and smooth. Next he finds himself in an octagonal room. At that point in time, the leading humanoid seems to leave the room. Alfred does not turn to look but he hears the sound of a sliding door. In this room he notices a shaft starting from the floor and reaching the ceiling. It was about 1.2 meters in circumference. On one side it had a z-shaped handle while on the other side there were two more humanoids standing.

While he was observing the surroundings he heard a voice coming from presumably one of the aliens saying; “come and stand under the amber light”. He could not see any light; he moved a step or two to his right and then he could see the light up on the wall just under the ceiling. He stood there for about five minutes waiting for the next order. It was as if the light was scanning him. Then the voice asked him, “what is your age?”and he replied that he would be 78 on his next birthday. Then, they asked him to turn around and face a wall. After about 5 the alien voice said “you can go, you are too old and infirm for our purpose” (Burtoo later claimed that his chronic bronchial problems contributed to his release).

Alfred walked down the steps using the handrail. He observed that the steps were made interlocking sections that would allow them to fold or close like a telescope (one part going inside the other). Some distance away he also noticed that the dome of the craft had began to revolve. Back at his fishing spot he found his dog calmly waiting for him. He looked at his watch; an hour had passed. A few moments later he heard the same sound he had heard when the UFO landed. The area lit up, the object rose and then shot off at a tremendous speed.

Alfred did not run back home in panic, he sat and continued to fish. At around 10 am two Ministry of Defense Policemen riding horses and started to chat about fishing and nothing in particular. Alfred Burtoo could not help to tell them what he had experienced a few hours back. One of the replied, “Yes. I suspect you did see that UFO. I expect they were checking on our military installations!” At 1pm he returned home and told his wife of the experience. Two days later he would go back to the landing site and found obvious evidence that something had landed. Not being able to leave the experience he contacted local newspaper “Aldershot News” in search of other witnesses. After a few weeks the newspaper run his story.