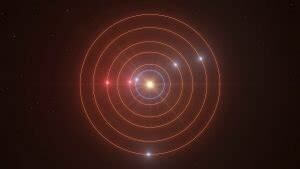 his animation shows a representation of the orbits and movements of the planets in the TOI-178 system. New research by Adrien Leleu and his colleagues with several telescopes, including ESO’s Very Large Telescope, has revealed that the system boasts six exoplanets and that all but the one closest to the star are locked in a rare rhythm as they move in their orbits (represented in orange). In other words, they are in resonance. This means that there are patterns that repeat themselves rhythmically as the planets go around the star, with some planets aligning every few orbits. In this artist’s animation, the rhythmic movement of the planets around the central star is represented through a musical harmony, created by attributing a note (in the pentatonic scale) to each of the planets in the resonance chain. This note plays when a planet completes either one full orbit or one half orbit; when planets align at these points in their orbits, they ring in resonance.