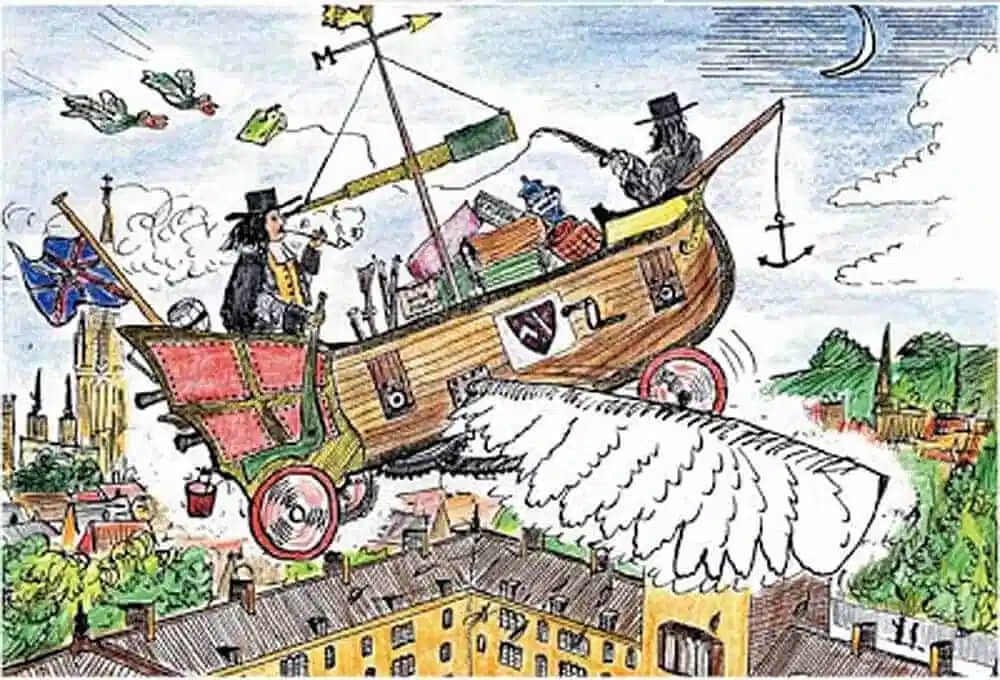 Officially, the first man stepped on the lunar surface in 1969. But humans had been trying to get there even before, at least as early as in the 17th century. The moon landing was predicted in the sci-fiction novel “From the Earth to the Moon” by Jules Verne in 1865. But almost 200 years before Verne’s classic story, Dr. John Wilkins had planned a take-off mission to Moon.

There was a time in British history when scientific knowledge was booming in the country with the new discoveries by Galileo in astronomy. Some space enthusiasts assumed they would see a space journey in their lifetime. Dr. John Wilkins, a founding member of the Royal Society, laid out a plan to send humans to Moon in an open chariot with a set of wings on it. According to him, the spacecraft would take off from the ground as an opposing magnet, land on Moon and meet the lunar inhabitants.

Wilkins was a passionate science lover, believing in Nicolaus Copernicus who formulated a model of the solar system centered on the Sun, with Earth and other planets moving around it. His dream for space travel was much inspired by sci-fiction novels, such as Johannes Kepler’s Somnium (1634) that speculated the human journey into space, traveling to Moon.

Wilkins was ready to believe in any sci-fiction story if that would be told in his time, as the 17th century was the time of the greatest scientific inventions such as telescopes. He was a firm believer in life outside Earth, which persuaded him to build the flying chariot or spacecraft, using the most advanced technology of that time. He expressed his ideas on how the Moon landing would happen in his book “Discovery of a New World; or, A Discourse tending to Prove that ‘tis probable there may be another habitable World in the Moon.”

He described the design of an opened flying chariot with a wheel. He assumed that if it could carry few people, they would land on Moon. His activist observation for space travel was circulated on the Earth’s gravitational force. He concluded that the Earth’s pull worked only up to 32 km from the surface, obviously, it was ridiculous. However, it was only 50 years later when Issac Newton put forward his theory of gravity.

Wilkins had broad imagination about his space program. With the available knowledge of space and biology, he supposed that hibernation would solve the problem of food for astronauts. He suggested that the distance to Moon was only 289,219 kilometers. According to him, “if a man could constantly keep on his Journey Thither to Moon in a straight line, though he could fly a thousand miles in a day, yet he would not arrive thither under 180 days or half a year.”

He argued that there was more than one world. If that was not true, the creator or God would not create the moon and other planets. Wilkins’ inspiration to fly had come from birds, kites, and angles in pictures. Though the flying mechanics of kites and bird’s wings are not for space travel, later in centuries it was used in airplanes.

He was so obsessed with space travel that he proposed a universal language, a cipher and signal system allowing anyone to “with privacy and speed communicate his thoughts to a friend at any distance.”

Unfortunately, by the time he got old, he understood the impossibility of moon landing. Besides, by 1959, it was discovered that space is a vacuum. Needless to say, Wilkins never set any man to the Moon, but he became the father of the space program. It does not matter that man failed to go out into space in the 1660s, but it led to the discovering of several circumstances that made modern space travel possible.