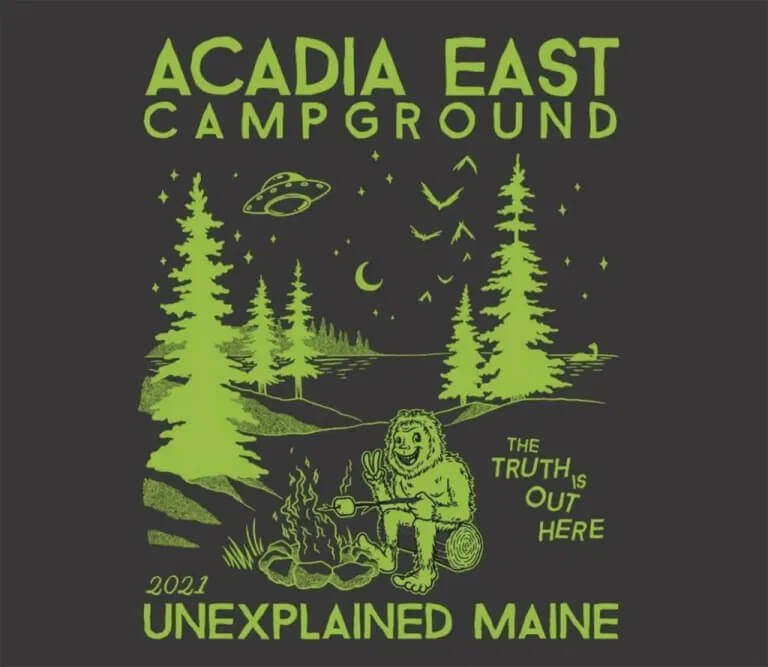 PORTLAND, Maine — Strange tales of the unexpected are standard fare when sitting around a crackling campfire, tenting in the woods. Erie lights in the night sky or uncanny noises emanating from the pines make for great storytelling while the flames dance and flicker.

It’s fun to be scared, especially if you want to believe.

That’s why a pair of Mainers is inviting like-minded people to join them this fall for a weekend camping trip dedicated to exploring enduring questions surrounding all things paranormal. Activities will include a midnight Sasquatch hunt, question and answer sessions with experts and guided meditation bent on summoning UFOs.

Space for the retreat is limited and registration just opened.

“I think we have room for about 30 people,” event co-organizer Toby McAllister said. “The real goal is to get a group of like-minded people together. We want people to be able to talk about these things without feeling weird about it.”

The Unexplained Maine camp-out grew out of a Facebook group by the same name, which McAllister founded.

It will be held Sept. 10-12 at Acadia East Campground in Gouldsboro. The campground offers semi-remote, tent-only sites. There is no running water, and campers must carry their gear into the woods from the parking lot.

Acadia East is owned by Tom Tash, the event’s other organizer. Tash opened it in 2018, near the Schoodic Peninsula, and calls it the “quieter side of Acadia.

He and McAllister are old friends.

After seeing an online community develop around the Unexplained Maine Facebook page, the two decided to partner on a real-life, in-person event.

Details and pricing are still coming together but Tash expects to have shuttle buses transporting campers to midnight hike through the nearby Donnell Pond Preserve in search of Bigfoot. He also plans to get people to the Schoodic Peninsula for wide-open views of the night sky.

“There’s like zero light pollution up there,” McAllister said.

There will be an expert on hand to guide people in UFO meditation while gazing at the unlimited expanse of the universe.

During the day, shuttles will also take campers to more traditional tourist attractions like breweries and natural wonders. All weekend meals will be included.

Tash and McAllister point out that, most of all, the weekend is meant to be fun and relaxed, a safe place to swap stories and information. On Friday night, there will be a screening of Maine filmmaker Nate Brislin’s documentary “Eyes from the Pines: The Pine Ape Project,” which explores local Bigfoot lore.

Tash has a tale of his own to tell, too.

He had an unexplained experience in 2013. It happened just outside Bangor, on Stillwater Avenue in Veazie.

“It was 3 a.m. and totally dark,” Tash said, “when I saw red, spinning lights, just above the trees, as wide as the road.”

To this day, he has no idea what they were but his memory of the event remains vivid.

“It was bizarre,” Tash said, “and I’ve only told four or five people about that.”

McAllister said he has never had a paranormal experience.

Instead of a personal event, McAllister traces his interest in the subject back to “The X-Files” television series.

“I used to beg my dad to let me stay up on Friday nights and watch it, and then be too terrified to fall asleep,” he said.

McAllister thinks there is a growing willingness to talk openly about such things, fueled in part by recent reports detailing the federal government’s study of unexplained aerial phenomenon — which includes sightings by U.S. Navy pilots.

“People are finding out that maybe they’re not as crazy as they have been led to believe,” he said.

To register and get more information about the Unexplained Maine weekend, visit acadiaeastcampground.com.