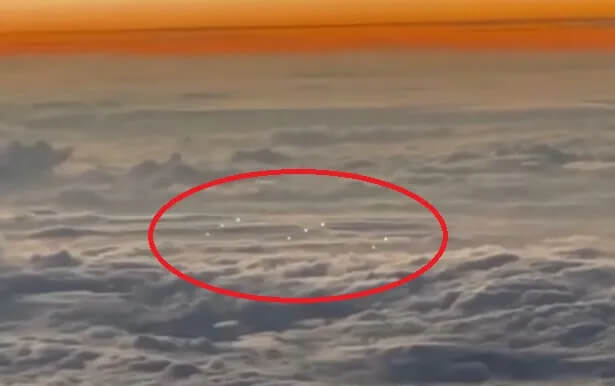 The pilot of the passenger plane and his colleagues were shocked when they saw a “Fleet Of UFOs”, moving in a strange pattern and disappearing into the clouds over the South China Sea.

The pilot was confused, witnessing a strange phenomenon as he flew over the disputed territory of the South China Sea in the airspace between Taiwan and Hong Kong on November 24, 2021.

The video footage (see below), filmed from the cockpit of the liner, shows nine flying lights shining in the clouds against the backdrop of the sunset. They move at the same altitude as the plane, almost 12 kilometers, so the explanation that these are just drones will not work here.

The lights, which at first fly in three rows, soon transform and turn into 12 lights, moving in the same direction straight ahead.

“I don’t know what it is. This is some weird shit. It’s only clear that it’s something flying,” the captain’s voice is heard off-screen, talking to the co-pilot.

The mysterious lights moved in this way for about a minute before disappearing into the clouds.

UFO researcher Scott Waring, known for his active online activities, wrote that it is possible that UFOs are observing Chinese warships.