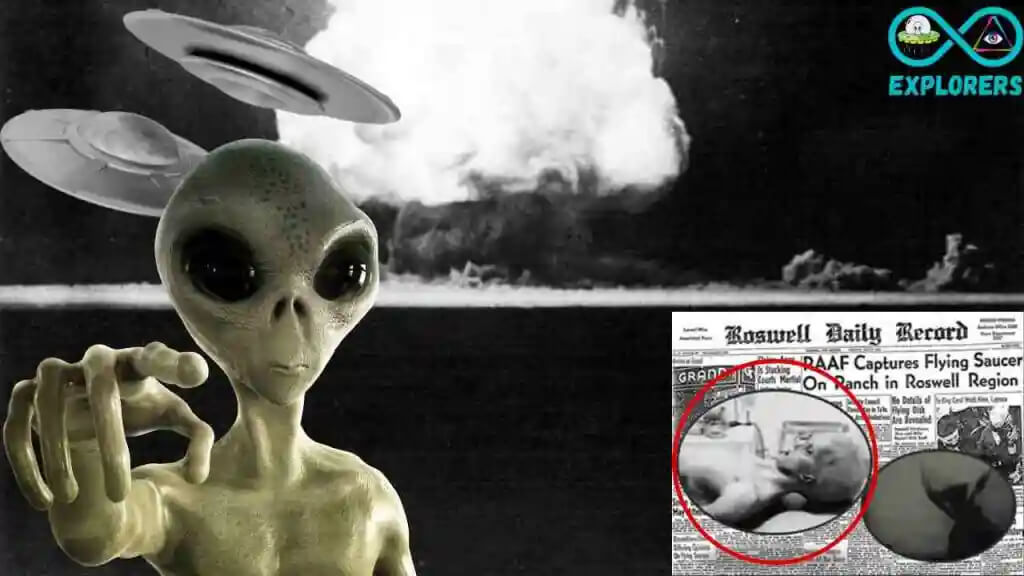 Mystery Wire
The atomic age officially began in August 1945 when the world’s first atomic bomb was detonated in New Mexico at a place called Trinity. But something else happened near that site just a few weeks later. A local rancher and his children said an egg-shaped craft of unknown origin crashed into the desert. The ranchers who lived near the bomb site saw and felt the blast.

The atomic age officially began in August 1945, when the world’s first atomic bomb (Trinity Test) was detonated in New Mexico, in a remote part of Alamogordo. But something else happened near that site only a few weeks later.

According to a new research book titled TRINITY: The Best-Kept Secret  (available on Amazon ), since 1945 there has been strong evidence of actual recovery of unidentified flying craft in the United States.

Written by investigative journalist Paola Leopizzi Harris and the famous Dr. Jacques Vallée, the reading delves into the details of a strange incident that occurred two years before the sighting of the pilot Kenneth Arnold – which would usher in the modern UFO era – and the Roswell case.

Throughout various research studies of the site, Harris, and Vallée reconstructed the historical observations of three witnesses – two of whom are still living – who described the circumstances of the accident, with details of the recovery of an avocado-shaped craft. almost intact by an army detachment in the San Antonio desert.

“Now remember, this was 1945, August 1945. Two years before Roswell” repeated Dr. Jacques Vallée in a recent interview with Mystery Wire. “The concept of flying saucers did not exist, Kenneth Arnold came up with that term in July. August ’47 is when all that flying saucers came up. Then there was no concept of something like that. And furthermore, the object was not a saucer, the object was shaped like an egg, like an avocado.

Vallée, who is an astrophysicist and the world’s foremost authority on UFO mysteries, was the model for the French scientist in Spielberg’s film Close Encounters of the Third Kind. According to what he collected from witnesses, the egg-shaped object was almost intact, with the exception of a hole in its side.

They were short. They were roughly the same size as the boys, around four feet tall. They were humanoids, ”said Vallée. They were breathing the air. They had no helmet or mask or anything else. They had big eyes. They had almost no mouth and very little nose. And they wore overalls that looked gray. And they stayed inside the object so that the children could see them through that opening.

Vallée estimated the size and weight of the ship by finding out what type of truck and trailer was used to transport it away from the crash site.

“My estimate is between four and five tons,” Vallée said. “It was placed on its side because if it had been upright, it would not have gone under the overpass in the road.”

Vallée says it took days for authorities to arrive and by then all three crew members were gone, but metal samples were collected and are now being analyzed in a laboratory.

“This case helps the credibility of Roswell because we found details about the material that was recovered there, including some material from inside the object, from inside the ship that we can test. And we are doing it now, “he said.

Surprisingly, the field literature only includes a few passing mentions of the case, and only one (foreign) television documentary has mentioned it, but the correlation between the extraordinary object accident and the explosion of the first atomic bomb in White Sands a few three weeks earlier, less than 20 miles away, it was lost. Harris and Vallée suggest that the correlation is significant for physical, geographic, and biological reasons, aside from the obvious strategic implications.

In 1945, the nuclear device code-named Gadget explodes in the Trinity test, the world changes forever. A month later, something appears taking a look at that site … Could it be that a non-human intelligence, wherever it comes from, was interested in what was happening in New Mexico at that time, given that so many different sites in That state were doing atomic projects and testing missiles and classified stuff like that? After all, such a test could have been like a beacon announcing to the universe and extraterrestrial intelligence that we have reached the Atomic Age.

Although in Vallée’s case, such intelligence could be more than just extraterrestrials, after all, there are other dimensions.

Because now we know, there could be parallel universes. There could be other forms of energy that we have not discovered, ‘explained the scientist.

«And the thing is that when I teach my physics class, I teach quantum mechanics on Monday, and general relativity on Tuesday. And there are some bright kids who say, sir, you know, how come they don’t match? Dude, you just said there are infinite dimensions, and then you talk about how Einstein doesn’t say that. So how do we solve that? Well, someone may have solved that little problem, which we have never solved since the days of Einstein. And, if you take it seriously, and physicists take it seriously, there could be – as Dr. Hynek used to say in his lectures – another Earth five minutes ahead of us, and there could be ways to jump from one to the other. or to communicate from one to another, “he concluded.