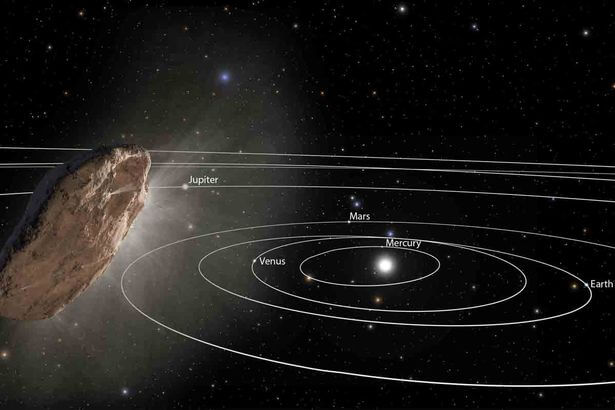 A top Harvard astronomer hopes we’ll find alien spaceships every month soon as super-smart ETs are cocooning themselves and filling the cosmos with junk.

Professor Avi Loeb reckons a space rock that visited Earth in 2017 was an ET – and believes more are on the way with a “quadrillion” similar objects within our Solar System alone.

The 450,000mph space object was dubbed “Oumuamua”, which is Hawaiian for “scout”, and the head of the Department of Astronomy at one of the world’s most prestigious universities insists its movements show it was an alien spacecraft powered by sunlight.

He told the Daily Star: “I think that’s it’s the first potential evidence and we can find more of the same and then study those more.

“In a few years it should see one such object per month, there are many of them. If Oumuamua is one out of a population of objects you can estimate how many of them should be per unit volume and the Vera C Rubin Observatory should find one per month or so.

“You might think that a flat geometry is the best but it turns out that it’s not always stable, you can slide off the beam. Actually a sphere can sit inside a hollow beam and ride in a stable fashion.

“Oumuamua could also have been a surface layer ripped off a space ship.”

Prof Loeb claimed the object traveled towards Earth’s solar system from the direction of Vega, some 25 light-years away, and intercepted our solar system’s orbital plane on September 6, 2017.

Writing in his upcoming book Extraterrestrial: The First Sign of Intelligent Life Beyond Earth, he said the space object shot past Earth before “moving swiftly toward the constellation Pegasus and the blackness beyond”.

Oumumua was first spotted by an observatory on the island of Hawaii containing the panoramic survey telescope, the highest definition telescope available.

Prof Loeb said: “Especially we are dealing with technological debris or relic because that technology might be far more advanced than what we have on Earth, potentially if get our hands on it we can import it to Earth it will give us a jump start in technology, otherwise it will take us many many years to develop, assuming they had more time than we do.

“And the Sun is a relatively late bloomer because most of the stars in the universe like the Sun form earlier billions of years before so it’s quite likely that if we meet another technology it will be far more advanced than ours.

“By the way, this is one way of finding dead civilizations, because the old method of looking for intelligent civilizations is you search for radio signals, this is a different approach, this is a ‘message in a bottle’ so to speak. And therefore you don’t care if the sender is still alive.

“Advanced civilizations, very advanced technological, might enclose themselves in a cocoon, I call that social distancing at a cosmic scale.

“Because they will build a habitat that provides everything they need but that doesn’t mean we will never learn about them because they always have to produce trash.