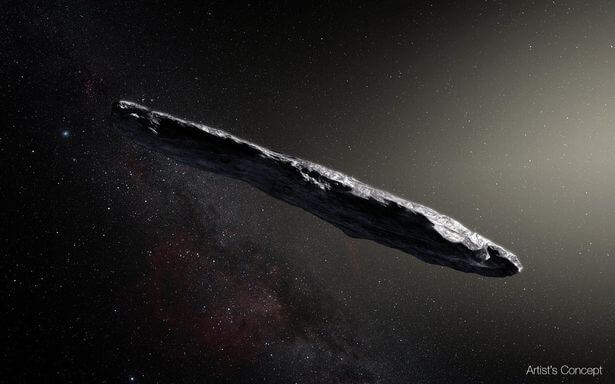 Members of the Aetherius society believe that advanced aliens from planets including Mars, Venus, Jupiter and Saturn have guided and protected humanity throughout our history.

The unique astronomical object dubbed Oumuamua by scientists is back in the news again after respected astronomer Professor Avi Loeb speculated that it could have been a stray piece of “alien technology”.

At some points in its October 2017 journey through the Solar System in Oumuamua accelerated in a way that was not expected for a simple lump of space rock.

Now a UFO cult group has claimed that not only was Oumuamua an alien space probe, but that it is by no means the first object of its kind to pass through our cosmic neighborhood.

The Aetherius Society is a pseudo-religious movement founded by Dr George King in the mid-1950s as the result of what he claimed were contacts with alien intelligences that he called mankind’s “Cosmic Masters”.

Members of the society believe that a number of other planets within our Solar System are inhabited – but not by life “as we know it”.

Members of the society claim that advanced civilizations from Mars, Venus, Jupiter and Saturn have guided and protected humanity throughout our history, and some of our greatest spiritual leaders – such as Jesus, Buddha, Krishna, Moses and others – have in fact come from other worlds.

Reverend Julian Rosser, an Aetherius Society Minister, claims that “Oumuamua was not the first recorded interstellar object in our Solar System. There was one 60 years earlier that was observed without its interstellar origins being realized”.

In 1957, two unusually bright comets were visible from Earth.

According to Dr King, one of them was not a comet at all but a spacecraft under control of an advanced spiritual intelligence from the planet Venus named Master Aetherius.

The spacecraft’s function, Dr King claimed, was to “spin a Karmic Web” which would bring about some sort of spiritual awakening on Earth.

Observations of the 1957 were limited to the technology available at the time. But recent detailed study of Oumuamua suggests that reports of its alien origin may have been a little premature.

Matthew Knight of the University of Maryland says: “The alien spacecraft hypothesis is a fun idea, but our analysis suggests there is a whole host of natural phenomena that could explain it.”