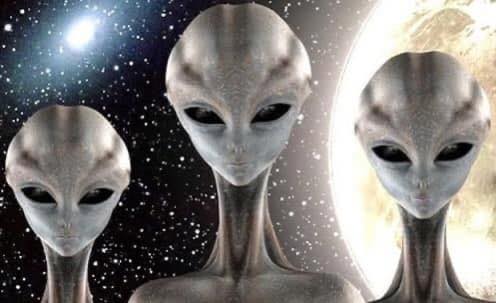 We’ve always been fascinated by aliens, and that’s putting it mildly. And mathematically speaking, aliens should exist.

“There are two trillion other galaxies we can see, each with a 100 billion Earth-like worlds,” said Seth Shostak , the senior astronomer at the SETI Institute. [SETI stands for the Search for Extraterrestrial Intelligence.] “100 billion, OK? It’s hard to believe they’re all sterile.”

Correspondent David Pogue asked, “I happen to know that this is sort of a trick question when people say, ‘Do UFOs exist?'”

We’ve always been fascinated by aliens, and that’s putting it mildly. And mathematically speaking, aliens should exist.”There are two trillion other galaxies we can see, each with a 100 billion Earth-like worlds,” said Seth Shostak , the senior astronomer at the SETI Institute. [SETI stands for the Search for Extraterrestrial Intelligence.] “100 billion, OK? It’s hard to believe they’re all sterile.”Correspondent David Pogue asked, “I happen to know that this is sort of a trick question when people say, ‘Do UFOs exist?'”

“Well, I mean, obviously UFOs exist, ’cause that just means unidentified flying objects,” Shostak said. “But the real issue here is not that you see things in the sky, it’s what you claim they might be.”

Author and investigative journalist Leslie Kean said, “You just can’t assume if you see something in the sky that looks a little weird that it’s some kind of alien thing, which is what a lot of people assume. Most sightings that people have – Oh, I see something in the sky! – those kinds of sightings can usually be explained: The planet Venus, airplanes, comets, shooting stars, birds. Let’s say five to ten percent are the cases that any conventional explanation can be ruled out; those are the cases that are of interest.”

In 2017, Kean coauthored a New York Times story that revealed the existence of, believe it or not, a secret Pentagon program devoted to studying UFO sightings.

“It was a huge revelation to know that the government took it that seriously,” Kean said. “There’s really been a sea change of attitude towards this topic. It’s not to say that there’s no more ridicule, but it’s way less.”

And sure enough, in a CBS News poll, two-thirds (66%) of Americans say they believe that there’s intelligent life on other planets – up 10% from 2017.

The Times story included three videos, captured by Navy fighter-jet pilots with infrared sensors in 2004 and 2015:

“The Navy and the Department of Defense have not been able to explain what this thing was, with all the work they’ve done on it,” Kean said.

The Pentagon declined “Sunday Morning”‘s request for an interview, but offered a statement that said, in part:

“The Department of Defense … take(s) any incursions by unauthorized aircraft … very seriously. and examine(s) each report. As we collect additional data, we expect to close the gap between the identified and unidentified to avoid possible strategic surprise.”

Kean said, “That’s always the biggest question: Is it Chinese? Is it Russian? Could it be their technology? And if it is, we’re in trouble, because they’re way ahead of us.”

Pogue asked, “I don’t think I’ve ever spoken to anyone who has seen more reports, paperwork, photographs, interviews as you on this topic. Has there ever been a confirmed extraterrestrial ship?”

Now, the military’s secret program was only one 2017 surprise. ‘Oumuamua was another.

‘Oumuamua (which means “scout” in Hawaiian) is something that a Hawaiian telescope glimpsed in 2017, just as it was leaving the solar system.

“We cannot really chase it; it’s moving faster than any rocket that we can produce,” said Avi Loeb, who teaches astrophysics at Harvard. Until last year, he was the chair of Harvard’s astronomy department.

“Prior to the discovery of ʻOumuamua, we have never seen an object from outside the solar system,” Loeb said. “The first interstellar object. And that by itself surprised me.”

First, it seemed to be flat, like a pancake. Second, it had no tail, as a comet does. Finally, it was accelerating away from the sun, as though being pushed.

“And in order for that to happen, the object had to be very thin. Sort of like a sail reflecting light, instead of reflecting the wind as you find on a sailboat,” said Loeb. “So, we suggested that perhaps this object is a technological relic – in fact, a sail produced by another civilization, and the first indication that such a civilization exists.”

Loeb’s theory didn’t win him any friends among other scientists, especially when he turned it into a bestselling book: “Extraterrestrial: The First Sign of Intelligent Life Beyond Earth” (Houghton Mifflin Harcourt). “My colleagues responded very negatively,” he said.

Shostak wasn’t persuaded by the Navy videos, either: “Think about the fact that there are 750 or so satellites up there, whirling around the Earth, making those photos you find on Google Earth. Don’t you think they would have found some of these saucers if they were really around?”

“You sound like a skeptic about there being extraterrestrial intelligence,” said Pogue. “And yet, you work for SETI, whose mission, supposedly, is to find it?”

“Yeah, I have no doubt that there’s extraterrestrial intelligence,” said Shostak. “But it’s a different thing to say, ‘And not only are they out there, but they’ve come to visit!’ The evidence, to my mind, is not good.”

Loeb, Kean, and Shostak all agree on one thing: That the government and the scientific community should spend more effort and money on the search for alien life.

Loeb said, “The scientific community refuses to discuss it. I think this should be a mainstream activity. Just like we are doing archaeology on Earth, we can explore archaeology in space in search for past cultures that are not around anymore.”

Next month, if all goes well, the Pentagon’s UFO research group (now called the Unidentified Aerial Phenomena Task Force) will finally go public with a report requested by Congress. But no matter what that report winds up saying, Seth Shostak doubts it will change anyone’s mind.

With regard to the public’s fascination with alien life, Pogue asked, “Is there anything wrong with people believing whatever they want to believe?”

“I don’t see too much harm in it, to be really honest about it,” Shostak replied. “I mean, the aliens, if they are here, they don’t do much, right? They don’t address the national debt, they don’t cure any disease, they don’t do anything, except occasionally appear to people in their cellphone videos.”