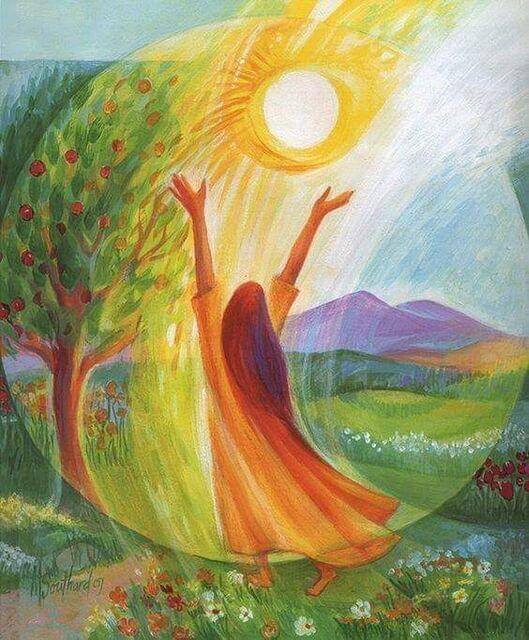 The new earth is near now. It’s already here. Blue mountains, healthy lakes, untouched nature. It’s already here. The kingdom of heaven already exists on earth. You need to change to new glasses, look at the earth with new eyes – With the eyes of love. Turn 180 degrees and look again at all the beauty that is here on earth and in humans. The new earth is here now. It has come to stay.

It has come down because so many lightworkers have worked hard to spread light and love over the earth. They have created a new grid where only love and light can flow. The old has burned up and the new one are about to be created.

The light has supplanted the darkness of the earth. The people who do not tolerate the light, who want to live in the dark, go through a difficult time.

But remember, before we came down to earth, we all chose what we wanted to work on during this incarnation. We have come different distances on the journey of the soul through the ages. We have different lessons to learn in this life. Do not judge anyone. Accept all. Everyone has the right to exist. Everyone has their own responsibility for their lives.

But do not wait too long before you go out and spread the light further in even larger circles on earth. Spread it and it like rings on the water go out over the earth, over the lakes, over the seas, over the forests, the meadows, and the mountains. Imagine that the new paradise on earth is here now. What you’ve been waiting for so long. It is already here.

It’s just a matter of raising your awareness so much that you can see with these new glasses, with new frequencies. Then, but only then, do you see beyond the veils of illusion. Do you see real life, the true reality – The true essence.

Get out of your hiding places! Show yourself as the brilliant people you are. Let your light shine brightly and you will allow others to shine as well. Do not hide in the dark valleys! It is not time for that anymore. That time has been. Now it’s time for you to step out of hiding. Get out into the world. Show your unique beauty to the world.

You know there is only one like you. There is no other. You can do a job in the small or in the big. Nothing is worth more than the other. The only thing that is worth something is that you take responsibility. Takes a single step forward in the service of light. Then you have contributed to the beautiful, fine development of our Mother Earth.

Many galaxies and galaxies are watching over Earth right now. There are many who are here to support this ascension.

Not everyone is peaceful. We should actually say that. There are those who want to gain control of the earth at any cost. They still exist. We will not deny it. But the light has triumphed over the dark forces. The people of darkness are still hiding in the nooks and crannies and are deep down in underground chambers. Far below the surface. Afraid to be seen.

But when light penetrates the earth’s crust into the earth’s interior, there are no cavities where they can hide anymore. Then the light will force them to the surface. Up on earth.

There they will be illuminated by spotlights and will be held accountable for the damage they have done to people on earth for a long, long, long time. Many of you do not really know what they have accomplished. But in time you will find out. And it’s not just them. Even in some of those whom you thought were the servants of light, a dark agenda is hidden – A dark agenda that will soon be illuminated with spotlights.

But before that happens, we choose everyone who walks the path of light to see with the new glasses, the fifth dimension glasses. We focus on what we want. What we focus on, we give energy to. We give birth to the new earth with our thoughts and our attention. It blooms more and more.

Who are we? We come from the Galactic kingdoms beyond, beyond, beyond. But we have ships down on earth that observe what is happening. We are well aware of what you call the struggle between light and darkness. We do not see it as a struggle. We see it more as a development.

An opportunity for the earth to now be free from controlling systems and those in power who only have their very own agenda to follow. Who have no compassion for other people, not for any living beings nor with Mother Earth.

Their time is over. You should know that. Their time is over. Let them splash around a bit more down there in their underground chambers or in their beautiful houses and churches. Soon, very, very soon, their
chatter will cease. They will be taken to the place where they best fit.

You do not have to do anything. Let go, let go. let go of all thoughts of things that are not good for this world. As we said before. Focus on the good. This is where the energy needs to go.

We from the Galactic kingdoms thank you for the fantastic work you have done so far. We thank you from the bottom of our hearts What we ask of you now is to calm down, go into meditation and silence for a little while every day according to your ability. Do not push yourself! Meditation should not be an effort. Focus inwardly on your heart and let love in your heart grow and spread to the people around you.

The people of love. People filled with love in their hearts. They are the ones who will populate the earth now.

We have guards down on earth. We have many guards on earth right now. They are there and make sure that everything happens in the divine order. They have an overview of everything.

They communicate with us in the Galactic kingdoms beyond, beyond, beyond. We give them instructions on how to act. It is up to our guards to take responsibility for bringing the people of darkness to justice. Not you ordinary people. They are not your mission. It is a much, much bigger mission than that. Let go of it. Let it be as it is and have complete confidence that we, the guardians of light on the earth, will handle these in the best possible way – For the good of all people.

Peace be with you